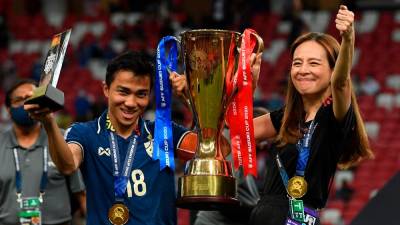 KUALA LUMPUR: Thailand have lifted the AFF Cup for a record sixth time.

Despite being held to a 2-2 draw by Indonesia in the second leg of the finals at the Singapore National Stadium yesterday, ‘The War Elephants’, who thrashed ‘The Garuda’ 4-0 in the first leg on Wednesday (Dec 29), earned an impressive 6-2 aggregate victory.

Indonesia came out as the more aggressive side this time, and a low shot from outside the box by midfielder Ricky Kambuaya in the seventh minute gave South Korean coach Shin Tae-yong’s men a 1-0 lead.

Prolific striker Teerasil Dangda then squandered a golden chance to equalise for Thailand, as his right-footed attempt from the centre of the box went over the bar at the end of the first half.

Brazilian-German coach Alexandre Polking’s side revved up their game in the second half, however, and deservedly scored two goals in quick succession to take the lead.

Adisak Kraison, who came on to replace Teerasil, slotted home to bring his side level in the 54th minute before Sarach Yooyen’s strike from outside the box made it 2-1, two minutes later.

Egy Maulana Vikri pulled one back for Indonesia with a tight-angled finish from the left side of the pitch in the 80th minute to level it, but it was too little too late for them to mount a comeback at that point.