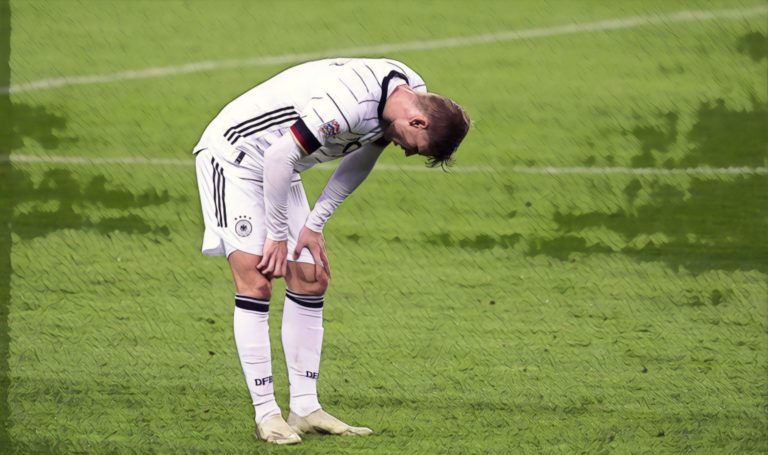 The much-maligned international break produced a plethora of excellent matches and unpredictable results as the qualification campaign for the 2022 Fifa Men’s World Cup in Qatar got underway.

Here are the standout upsets and shock results from the past week of international games in Europe.

The past three world champions all had a bit of a weird international break, as we’ll get to in due course. But this was undoubtedly the most shocking result of the week, and maybe even in years.

North Macedonia took the lead in first-half stoppage time through former Inter Milan forward Goran Pandev, who is somehow still knocking about despite his career being roughly 90 years long at this point.

İlkay Gündoğan found an equaliser from the penalty spot on the hour mark, at which you would have fully expected Germany to power on and put the visitors to the sword. Instead, Timo Werner missed an absolute sitter, and the Macedonians struck a late winner.

Germany now sit third in Group J with six points after three games, while Armenia sensationally top the table with a 100% record. North Macedonia lie in second place, while Iceland languish in fifth.

The Republic of Ireland have been on a downward trajectory for many years now, with their inability to develop young talent biting them on the arse big time. But this might be the lowest point in 50 years for the Irish game.

Stephen Kenny’s team came into this tie on the back of a spirited but ultimately unsuccessful performance away to Serbia, losing 3-2 in their opening World Cup qualifier. The home tie against Luxembourg was seen as a perfect opportunity to bounce back and get the Kenny era up and running.

Instead, Dynamo Kiev striker Gerson Rodriguez did this with just six minutes remaining in the match:

“The gloom really does deepen for Ireland now…”

Republic of Ireland concede an 85th minute goal to Luxembourg.

A historic victory for Luxembourg, but an absolute disaster for the Boys In Green. Given the fact that the Red Lions drew against world champions France in Paris last year, perhaps this is not quite as big an upset as one might initially think. Whatever your viewpoint, it all but confirms Ireland will not be going to the World Cup next summer.

Following a friendly draw with Qatar on Tuesday night, Ireland are now winless in 12 matches. Worth noting, however, that North Macedonia lost 1-0 to Luxembourg back in 2015, so it’s only a matter time before Ireland are world beaters, too.

Once again this might not truly belong in the shock result column given the relative form of both sides.

Turkey had lost just three of their preceding 18 matches, including a win and draw against France in the Euro 2020 qualifiers. Netherlands experienced an upturn under manager Ronald Koeman, but his successor Frank de Boer has overseen a reversion to the kind of form that saw the Dutch fail to qualify for the last two major international tournaments.

It was the manner of the defeat that should worry Netherlands supporters, though. Their side were 2-0 down by the break, and conceded a third just 31 seconds into the second-half. There was an element of bad fortune to all of the goals: Burak Yilmaz’ opener took a wicked deflection, the second was more clumsy than unlucky as they conceded a penalty off the back of a poor challenge, and the third was your standard Hakan Çalhanoğlu belter from range.

Sometimes these things happen in football. But the Dutch never really looked in the game until they scored two goals in quick succession around the 75th minute mark. Five minutes later, however, the game was done when Yilmaz found his hat-trick with a stunning free-kick.

Netherlands have since bounced back with a win over Latvia and a seven-goal thrashing of Gibraltar. It’s not a good sign, though, that they looked thoroughly second-best against a side with far less talent at its disposal.

In such a tight group with Montenegro and Norway also on six points each, the Oranje cannot afford to give up goals so cheaply in this campaign. Otherwise they will find themselves sitting at home for the third time in four tournament cycles.

Turkey immediately followed up their brilliant win over the Dutch with a convincing 3-0 victory against Norway, putting them in the driver’s seat in Group H.

They proceeded to put the handbrake on, leading by two goals twice against Latvia before ultimately drawing 3-3 against the weakest side in the group.

The Turks should have sailed to a third consecutive victory, but they somehow conspired to give up a pair of cheap goals in the second-half. Along with the Netherlands match, this is starting to look like a bit of a pattern. This team could be dark horses at Euro 2020, but not if they fail to defend leads like this.

In their defence, these six day windows in which teams are expected to play three competitive matches may lead to more of these kind of wild swings in the qualifiers. It certainly makes the international break more interesting.

12 of the biggest upsets in international football

The world champions have had some weird results since attaining glory in 2018, but there can be no glossing over this one. A draw at home to Ukraine is a disappointing start to the defence of France’s crown.

Olivier Giroud missed a glorious chance from six yards out in the first-half, before Antoine Griezmann scored a beautiful strike to give Les Bleus the lead. That should have been the catalyst for a definitive France win, but the Chelsea striker missed another chance from the exact same spot.

The one-goal lead only held for 12 minutes into the second-half, at which point they conceded a most unfortunate own goal from Presnel Kimpembe.

The ball trickled over the line at an agonisingly slow pace. Despite having over half an hour to retake the lead, France failed to create anything of note from therein.

As you would expect in a meeting between these two nations, Spain dominated matters against Greece last Thursday. They had 80 percent possession, made nearly a 1000 passes, and took nine shots, some of which were very good chances, while not conceding any shots from open play. And yet, they were held to a 1-1 draw at home.

Alvaro Morata opened the scoring with a wonderful chest-and-volley shot in the 33rd minute. Their failure to put away their other opportunities is all on them, but the penalty they conceded was odd and arguably unfair.

Iñigo Martínez miscontrolled the ball in his box, but recovered to clear it. Except he followed through slightly to collide with Giorgos Masouras, and the referee pointed to the spot. It was a harsh decision, and ultimately led to the Greeks securing a point with their only shot of the game.

In isolation this result shouldn’t cause alarm, but it does when they barely squeaked past Georgia on Sunday. Again they had nearly 80 percent of the ball and had nine attempts on goal, but the underdogs took a first-half lead and would have come away with a draw had it not been for a Dani Olmo screamer deep into injury-time.

They completed a handy win over Kosovo on Wednesday night, but Luis Enrique’s side seem well off the pace, which is not a good sign ahead of a European Championship they will be hoping to contend for.

The best football kits in the international game right now

Croatia came into this tie on the back of some bad form, winning just one of their six Uefa Nations League matches. Still, they would have expected to roll past Slovenia, who had just lost 1-0 to Cyprus.

Sandi Lovric found the net in the 15th minute and the Slovenians managed to hold on for the remainder of the tie. A terrible start for the World Cup runners-up, although they have bounced back with consecutive wins to go top of a competitive Group H, as the next result will show.

Having just drawn 2-2 with minnows Malta, Slovakia could hardly argue with being tagged as the underdogs in their qualifier against Russia.

Yet they came away with a massive victory thanks to goals from Milan Škriniar and Róbert Mak either side of a Mário Fernandes equaliser. It’s a massive boost for the unfancied Slovaks’ chances of qualifying for the 2022 World Cup.

That being said, before the qualifiers got underway, Russia had not won in their previous six matches, including a 5-0 hammering at the hands of Serbia. While they would have been favourites here, the Russians can not take their rivals lightly if they wish to finish in the top two.

This spate of unpredictable results mean Group H is wide open, with just three points separating first from fifth in the six-team table after three matches.