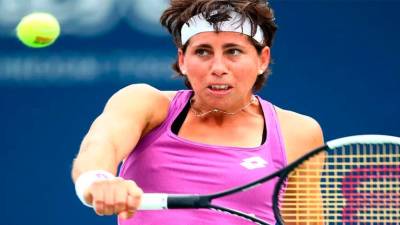 PARIS: Carla Suarez Navarro (pix) begins an emotional final French Open on Tuesday, less than a year after she was diagnosed with cancer.

The popular Spaniard, a former world No. 6 and two-time quarterfinalist in Paris, was told in September 2020 that she was suffering with Hodgkin’s lymphoma.

But almost nine months later, and after gruelling sessions of chemotherapy and radiotherapy, the 32-year-old is fit, healthy and ready to face former US Open champion Sloane Stephens for a place in the second round.

“I enjoy every day, enjoy the moments on the court. And try to enjoy these last months on the tennis circuit together with my tennis family as I think I have done these years,” said Suarez Navarro, a winner of two WTA titles.

She hasn’t played a match since she faced former two-time Wimbledon winner Petra Kvitova in Doha in February last year.

“As a person, she has always been one of the most sympathetic girls on the tour. Pretty humble, down to earth,” said Kvitova.

“I saw her in Madrid and in the situation I didn’t really know what to do. I said, Carla, can I hug you? She said, ‘Yeah’.”

When Suarez Navarro was first diagnosed, she was inundated with messages of support from the world of sport – Rafael Nadal, Novak Djokovic, Garbine Muguruza as well as Formula One driver Carlos Sainz and Barcelona football club.

“I think I’m a positive person, not pessimistic. In the world of tennis, everyone talked to me, everyone put things on Twitter and Instagram.

“That for me was very positive, a lot of strength, a lot of energy,” said Suarez Navarro.

This will be her final appearance at the French Open, the first stop on a farewell tour which will also take in Wimbledon, the US Open and possibly the Olympics in Tokyo.

“I am tremendously excited to be able to participate in Roland Garros.

“I have been working in recent months to give myself the opportunity to compete one last time in Paris. I am looking forward to taking the court and feeling again how special this place has always been for me.”

When she tweeted news of her recovery just five weeks ago, a photo showed her with cropped hair – a legacy of eight chemotherapy and 15 radiotherapy sessions.

“I sent a message to Carla every week to see how she was doing, because I felt really close to this emotion.

“I had an occasion in my family where somebody’s battling through cancer, and sometimes you feel helpless. But that one moment of encouragement hopefully sometimes makes a difference in somebody’s day, and I’m so proud of her.

“I’m so happy that she picked up her racquet again and she’s competing here. I’ll be watching her play and I’ll be cheering for her for sure.” – AFP