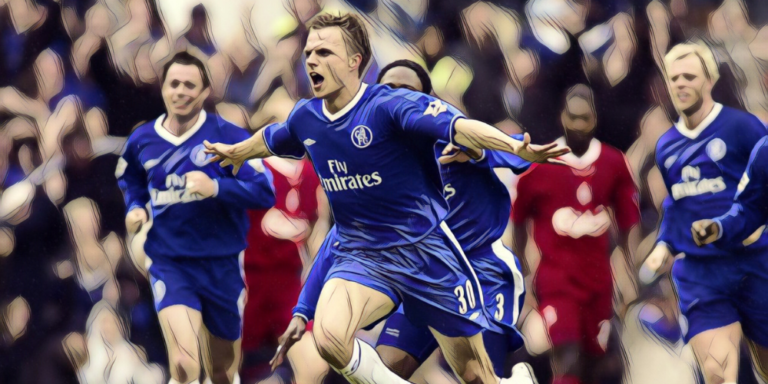 Chelsea’s history was forever changed following Roman Abramovich’s transformative takeover of the west London side in 2003, a change in ownership that saw the club catapulted into the financial elite.

Abramovich had sought the right club to invest his billions into after being enamoured with the game following a Champions League clash between Real Madrid and Manchester United in 2002/03, with Chelsea’s qualification to Europe’s elite that season persuading the Russian to purchase the Blues.

Chelsea‘s passage into the Champions League came following a final day winner-takes-all showdown with top-four rivals Liverpool, both sides level on points ahead of a clash dubbed the ‘£20million match’ at Stamford Bridge.

The home side came from behind to win 2-1 and seal their place in the Champions League, a sliding doors moment that had repercussions far greater than simply European qualification.

It was a result that would be worth much, much more to a Chelsea side with spiralling debts, paving the way for a Russian revolution that has since delivered five Premier League titles and two European Cups amongst a glittering collection of major honours.

Following the west Londoners success in this season’s Champions League this weekend, we look back at the Chelsea team whose final day win paved the way for a new era to be ushered in.

Cudinci arrived at Stamford Bridge as a relative unknown in the late nineties, spending much of his first campaign as a backup option before breaking into the team on a regular basis.

The Italian became one of the best goalkeepers in the Premier League in the early 2000s, being named as Chelsea’s Player of the Season during the 2001/02 campaign.

Cudicini made 46 appearances in all competitions during the 2002/03 season as Chelsea secured Champions League qualification, though the signing of Petr Cech in 2004 saw him struggle for opportunities.

He stayed as support to Cech and spent a decade with Chelsea before joining Tottenham, since returning to Stamford Bridge upon retirement where he now works as a loan player technical coach.

Melchiot came through the academy system at Ajax before making a free transfer move to Chelsea, signing for the west Londoners in 1999 and winning the FA Cup in an injury-hit debut season.

The former Netherlands international spent five seasons with the club and made 165 appearances across all competitions, but the arrival of Jose Mourinho as manager in 2004 saw his Chelsea career come to an end.

Mourinho’s signing of Paulo Ferreira from former club Porto saw Melchiot moved on, the Dutchman signing for Birmingham City and later having spells at both Rennes and Wigan.

Amongst the few pre-takeover players who remained integral to Chelsea’s early successes of the new era, William Gallas was a versatile defender who racked up 225 appearances in club colours.

Gallas started at centre-back for the win over Liverpool and was named in the PFA Team of the year for the 2002/03 season, though often featured at left-back following the arrival of Jose Mourinho, forming part of the side that won back-to-back league titles under the ‘Special One’.

The France international grew frustrated with his full-back role and later left in controversial fashion, joining Arsenal as part of the deal that saw Ashley Cole head in the opposite direction after pushing for a Stamford Bridge exit.

Desailly signed for Chelsea in the nineties having enjoyed huge success on the continent, becoming the first player to win back-to-back Champions League trophies with different clubs at Marseille and AC Milan.

The France international featured at centre-back for Chelsea despite playing in midfield earlier in his career, his nickname ‘The Rock’ justified following a series of strong performances as the Blues secured Champions League qualification for the first time in his debut season.

Desailly was named as club captain and became an iconic figure in the club’s history across six seasons in the Premier League, winning the FA Cup in 2000 and mentoring an emerging John Terry.

Celestine Babayaro shot to prominence after becoming the Champions League’s youngest ever debutant aged just 16 years and 86 days, incredibly being sent off just 37 minutes into his record-breaking appearance for Anderlecht.

He signed for Chelsea in a £2.25m deal whilst still a teenager and helped the club to UEFA Cup Winners’ Cup and FA Cup successes, spending seven-and-a-half seasons at Stamford Bridge

His time with the club saw the Nigerian face competition from the likes of Graeme Le Saux and Wayne Bridge, though the back-flipping Babayaro made almost 200 appearances before joining Newcastle.

Jesper Gronkjaer’s career with Chelsea would perhaps be fairly forgettable had it not been for this one fixture, with the Danish winger responsible for a winning goal that changed the course of English football history.

Chelsea trailed to an early Sami Hyypia goal before coming from behind to win, the often inconsistent Gronkjaer assisting Marcel Desailly’s equaliser before cutting inside to curl home the winner.

Somewhat ironically, whilst the Dane’s intervention catapulted Chelsea onto a path of success it simultaneously ended his own Stamford Bridge career, a wealth of new arrivals ousting him from the side before a move to Birmingham City in 2004.

Having enjoyed huge success in winning a domestic double across the capital at Arsenal, Emmanuel Petit signed for Chelsea in a £7.5m deal, via a disappointing single season at Barcelona.

The World Cup winner provided experience in midfield and formed a fine partnership with Frank Lampard as Chelsea secured Champions League qualification, the 2002/03 campaign the best of his three years with the Blues.

Injuries restricted his impact the following season as the Roman Abramovich era began, in what proved to be the final season of his career after being released on a free transfer.

Question marks were raised following Frank Lampard’s £11m move to Chelsea from West Ham, though any doubts were ended across a 12-year career with the club that saw the midfielder become arguably the greatest player in the west London side’s history.

Three Premier League titles, the Champions League and a record-breaking 211 goals for Chelsea are just some of the incredible achievements from Lampard’s career, as he established himself as the best goalscoring midfielder of a generation.

Somewhat incredibly for a midfielder, he scored 10+ league goals in 10 consecutive Premier League campaigns, with the former England international the fifth-highest scoring player in the division’s history.

Having come through the academy ranks at Chelsea, Le Saux returned to the club for a second spell in 1997 after winning a Premier League title at Blackburn two years earlier.

The versatile left-sided player made his final appearance for the west London side during the final day showdown against Liverpool, memorably being on the receiving end of a reckless Steven Gerrard challenge that resulted in a red card for the young Reds midfielder.

Le Saux made 312 appearances across two spells with the Blues, winning the League Cup and UEFA Cup Winners’ Cup during the second of those stints.

One of just three players in this starting side to win a Premier League winners’ medal as Chelsea were crowned champions two years later, Gudjohnsen remained an important part of the side despite wholesale changes and extravagant additions.

The Icelandic international had formed an excellent partnership with Jimmy Floyd Hasselbaink, the former bringing a touch of elegance and cool to complement the latter in a combination labelled ‘fire and ice’.

Gudjohnsen scored 78 goals across all competitions for Chelsea and starred during their successive title wins, later moving to Barcelona and winning a historic treble under Pep Guardiola in 2008/09.

Jimmy Floyd Hasselbaink left Chelsea a little over a year after their transformative takeover, the forward ushered out the door despite a prolific goalscoring record.

The Dutchman signed in a record £15m deal in 2000 and won the division’s Golden Boot in his debut season, becoming the second player to win the accolade with two different clubs after previously winning the award at Leeds.

Hasselbaink scored 23 league goals in each of his first two seasons, though endured a downturn in 2002/03 as Claudio Ranieri rotated his striking options throughout the campaign.

Possessing a penchant for thunderous strikes from distance, he scored 87 goals in just 177 appearances for Chelsea in all competitions before joining Middlesbrough.

Perhaps the most forgettable member of the Chelsea squad from that day, Mario Stanic became an instant cult hero after scoring a stunning brace on debut, including an effort of incredible piss-taking proportions against West Ham.

The Croatian midfielder juggled the ball nonchalantly before lashing home an effort from 35 yards, though that sadly proved as good as it got for Stanic who failed to make a lasting impression – in just 59 league appearances – across four seasons.

Chelsea fans waved goodbye to a club legend as Gianfranco Zola made his final appearance against Liverpool, the Italian genius introduced for the final 18 minutes after playing a key role in the Blues’ push for Champions League qualification.

Zola had rolled back the years in a brilliant 2002/03 season to finish as Chelsea’s leading scorer with 16 goals in all competitions, a fitting finale for a player who had lit up Stamford Bridge with no shortage of magical moments across seven seasons.

Zola saved one final party trick for the winner-takes-all clash with Liverpool, a sensational dribble past four opposition players as Jamie Carragher was left resembling an out-of-time breakdancer as he tried and failed to dispossess the veteran.

Introduced as a late substitute, Carlton Cole enjoyed the best season of his career at Chelsea with six goals during the 2002/03 season.

Hopes were high for a young Cole as he came through the Chelsea ranks, but despite glowing reviews from a series of managers he made just 25 league appearances before departing.

The forward’s best football came at West Ham, where he scored 68 goals in 293 appearances and earned a handful of caps for England at international level.

Read – 10 of the most iconic Champions League final moments ever

The post Remembering the Chelsea XI whose last day victory in 2003 made the Abramovich era possible first appeared on The Football Faithful.