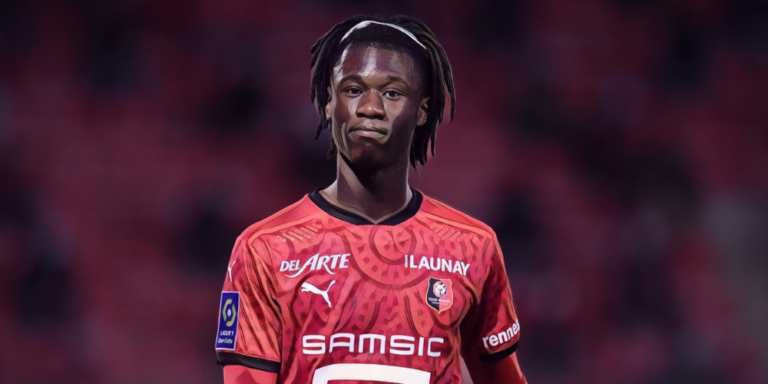 Rennes midfielder Eduardo Camavinga is reportedly in ‘no hurry’ to decide his future, amid rumoured interest from Manchester United.

The 18-year-old has emerged as one of the most sought after talents in world football, having burst onto the scene two years ago, before going on to help the Ligue 1 side secure Champions League football in the 2019/20 campaign.

Already a key figure for his club, the teenager announced himself on the international stage with a clever overhead kick for France against Ukraine in October, albeit while going on to miss out on a place in Didier Deschamps Euro 2020 squad.

Such form has alerted the attention of some of Europe’s top sides, as too has his current contract situation – his existing deal set to expire in June 2022 sparking suggestion she could be moved on this summer in order to recoup a transfer fee.

However, writing in a column for Benchwarmers, Italian journalist Fabrizio Romano says that the Frenchman is in ‘no hurry’ to make a decision over his future, amid interest from the likes of Manchester United and Paris Saint-Germain.

Previous reports have suggested that United received little encouragement from their early discussions with Camavinga’s representatives, with the youngster said to prefer a move to Spain, with Real Madrid also having been linked in the past.

Romano reports that any potential suitors would have to fork out around €35-40m to sign Camavinga this summer, although the Old Trafford outfit are believed to need to sell before they can make further signings.

One possible sale could be Paul Pogba who has been linked with a move to PSG, although the Parisien side are also one of the sides keeping tabs on Camavinga.

There is also the potential that the youngster could wait until his contract expires in 12 months’ time, meaning the cash-strapped La Liga duo of Barcelona and Real Madrid could join the race, with neither side currently in a position to sign him for a fee this summer.

As for Manchester United, they have also been linked with the likes of Atletico Madrid’s Saul Niguez, West Ham’s Declan Rice and Wolves’ Ruben Neves over the course of the summer as they look to strengthen in the middle of the park.

The post Man Utd target Camavinga in ‘no hurry’ to decide future first appeared on The Football Faithful.