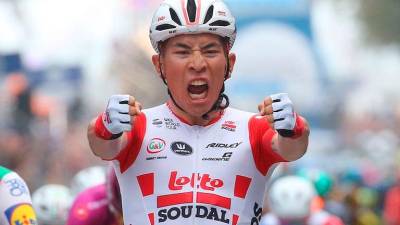 FRANCE: Australian Caleb Ewan (pix) timed his effort to perfection to win the third stage of the Tour de France in a bunch sprint at the end of a 198-km hilly ride through the Alpine foothills on Monday.

Sam Bennett looked in control but the Irishman had probably underestimated the headwind and settled for second place as he watched Lotto-Soudal fastman Ewan whizz around him to snatch his fourth stage win on the Tour.

Tuesday’s fourth stage is a 160.5-km effort from Sisteron to Orcieres-Merlette for the first summit finish of the race, with Briton Adam Yates, who trails Alaphilippe by four seconds overall, eyeing the yellow jersey.

An all-French breakaway featuring Anthony Perez, polka dot jersey holder Benoit Cosnefroy and Jerome Cousin was kept on a tight leash by the bunch as rain began to fall with 150 kilometres left.

Cousin, who won a Paris-Nice stage in Sisteron in 2018, tried his luck solo with Perez and Cosnefroy being swallowed up by the pack despite the leisurely pace.

Perez later abandoned with a rib fracture and a possible collapsed lung after crashing into his team’s car, his Cofidis outfit said.

Cofidis said the 29-year-old had been taken to hospital for further checks.

Cousin was reined in with 16 kms left by the peloton controlled by Alaphilippe’s Deceuninck Quick Step as the sprinters’ teams started to gear up for the bunch sprint.

SCHALKE 04, Harit: “Parting ways? I wouldn’t have agreed on extending”