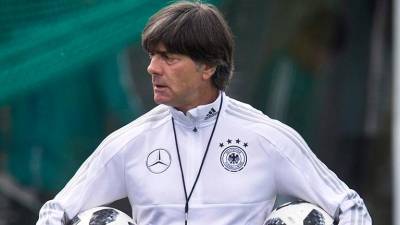 STUTTGART: Joachim Loew in a black pullover is hardly a new sight but onlookers will now soon need to get used to him adding a face mask to his fashion ensemble – white, on Monday, as he greeted his squad in Stuttgart.

The coronavirus pandemic has enforced a record break on the Germany team and Loew will have little time for enjoying the scenery in the idyllic suburb of Degerloch before his side host Spain in the Nations League opener on Thursday.

But a rushed preparation is better than no game to prepare for and the police patrolling the tight streets had only a few – socially distanced – fans to keep an eye on. Nevertheless, one made it through for a selfie with midfielder Kai Havertz.

“You can all imagine that we’re unbelievably happy to get going again,” said Loew ahead of a later training session at the ADM Sportpark of local lower league side Stuttgart Kickers.

Before that, however, there is a round of coronavirus tests for Loew and his players. Group contact is only allowed with a negative result – the new normal.

Loew is doing without Bayern Munich’s Champions League winning quartet of Manuel Neuer, Joshua Kimmich, Leon Goretzka and Serge Gnabry, although Niklas Suele, after a long knee injury, is on board.

RB Leipzig pair Lukas Klostermann and Marcel Halstenberg have also been granted a break after reaching the last four at the mini-tournament in Lisbon.

“There we have to think ahead and act,” said Loew. “Next year at the Euros we will all be together.”

Bayern newcomer Leroy Sane, another returning from a torn cruciate ligament, is included as are Hoffenheim goalkeeper Oliver Baumann, Borussia Moenchengladbach’s Florian Neuhaus and Robin Gosens of Atalanta, all looking to debut.

Germany’s most recent match was Nov 19 last year when they romped 6-1 over Northern Ireland to conclude qualifying for the Euros which were postponed. The pandemic also forced the cancellation of friendlies with Spain and Italy.

The resumption of play is a huge relief for German federation (DFB) director Oliver Bierhoff. “If we have no international games that of course means an unbelievable financial loss for the DFB,” he told broadcaster ARD.

Previous strong planning meant a year or two without matches was okay he said and also acknowledged what will be a challenging time ahead.

“Of course when we have to play through three internationals inside eight or 10 days in October and November it is physically a challenge,” Bierhoff said.

“It is a challenge for the coaches. They hardly have training possibilities with the team.”

Loew will accept the sporting problems posed by the previously unimaginable toll of eight games in 11 weeks to the middle of November while at the same time aiming ahead to summer 2021.

“The Euros next year have the absolute highest priority,” he said. “I know you can only win when you can go into the tournament mentally and physically fresh.”

Nonetheless, Loew will approach the Nations League seriously, especially after the first edition two years ago ended in a debacle which would have seen Germany relegated but for reconstruction.

“The sporting merit of the games is of course there, we’re playing against Spain and Switzerland (in Basel on Sunday),” he said. “The Nations League is a very good competition, the teams are at a high level. That’s also good for the development of our young players.”

Ukraine complete Germany’s top-flight A4 and Joachim Loew’s side also face Turkey and the Czech Republic in friendly matches in the coming months. – dpa