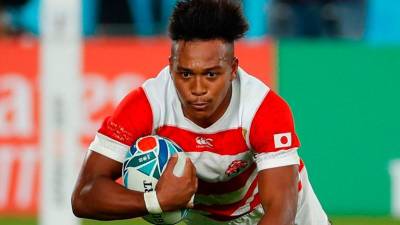 PARIS: Japan fullback Kotaro Matsushima (pix) said on Monday the Brave Blossoms pulling out of a reported Eight Nations competition is a “disappointment” with the Top League put on hold and domestic-based players set to go without playing until next January.

Last year’s Rugby World Cup hosts were set to join the Six Nations countries as well as Fiji in a tournament held in November and December to replace the cancelled autumn Tests but Kyodo News claimed last week Jamie Joseph’s men had opted out due to the coronavirus pandemic.

“It’s definitely a disappointment for us because it could have been a good motivation for all the boys in Japan,” he told reporters.

“The Top League was cancelled this year, the boys don’t have games at the moment and just have to train this year,” he added.

Matsushima, 27, who is set to make his debut for French club Clermont this Sunday, last played in February before the Top League was cancelled in March as Hino Red Dolphins’ New Zealander Joel Everson tested positive for cocaine.

“Before I came here I was thinking of recovering my body from the World Cup camps. The first two months were alright but after that it was hard to come back from the long off time,” he said.

“For me as I arrived here it was pretty tough for me to get my body back,” he added.

Matsushima, who has 39 Test appearances, is set to become just the sixth homegrown Japanese player to feature in France’s two professional divisions after the likes of fullback Ayumu Goromaru and Takeshi Hino for Toulon and Toulouse respectively.

The former Suntory Sungoliath back three-quarter he hopes to be an example for future exports with his linguistic ability playing a key part in settling in.

“My success is going to be continued by the boys in Japan. I want to perform well so other boys can say they can do it,” he said.

“Definitely the English-speaking boys were really helpful, they made my arrival in Clermont really smooth. Also the French boys are friendly and kind. For me it was easy to get into the team,” he added.

Matsushima has been signed by the 2017 Top 14 champions to replace Nick Abendanon and despite staring on wing for his country by scoring five tries at the World Cup he said he wants to feature in the No. 15 shirt.

“I prefer fullback because the more I get space the more I can create chances for the boys,” he said.

“I think in the Top 14 if you’re on the wing you have to be more physical and big. If I can play 15 I can create more chances on the outside,” he added. – AFP