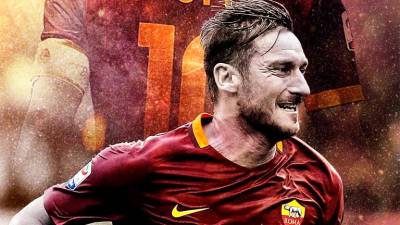 ROME: Roma legend Francesco Totti (pix) believes that “sooner or later” he will reconnect with the club which has just changed owners, he told Italian daily La Repubblica in an interview published on Tuesday.

Totti, 43, spent 24 years at the club as a player before moving upstairs to the boardroom.

He resigned as a director in June 2019, however, after falling out with US owner James Pallotta and with management, who he criticised for keeping him out of decisions.

But the sale this summer of the club to another American businessman, Dan Friedkin, could lay the foundations for a reconciliation between the ex-captain, who has since become a players’ agent, and his long-standing club.

“It is natural to think that sooner or later Roma and I will meet again,” he told La Reppublica.

“But I am not fixing the moment, and above all I am not waiting for it to happen by sitting idly at home.”

Totti said Friedkin had understood quickly the essentials of running a club.

“In Rome, the owner must be physically present,” he said.

“The announcement that his son Ryan will come to live here is a move in the right direction.

“Pallotta made mistakes because he made decisions on reported information.”

Totti said he had not been in contact with the new bosses but said he was ready to “have a coffee” with them. – AFP