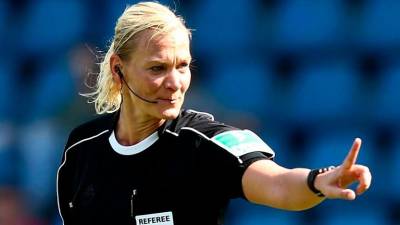 BERLIN: The first woman to officiate a match in any of Europe’s top five leagues Bibiana Steinhaus will retire following Wednesday’s German Super Cup, it was announced hours before kickoff.

The high-profile clash between Bayern Munich and Borussia Dortmund behind closed doors at the Allianz Arena will be the last match refereed by the 41-year-old, the German Football Assocation (DFB) said.

“Like many people during the coronavirus pandemic, I have reflected and re-evaluated many things,” said Steinhaus in a statement.

The Hanover policewoman has refereed 23 Bundesliga matches since making history in 2017 and said she decided to finish “after carefully weighing up many factors”.

“In future, German football will not only have to do without an outstanding female referee, but will also lose an extraordinary personality and pioneer in a male domain,” said Fritz Keller, president of the DFB.

Steinhaus said she wants the focus of Wednesday’s clash between European champions Bayern and last season’s Bundesliga runners-up Dortmund to be “solely on the game”, not her swansong.

“In due course, I will talk in more detail about the reasons for my withdrawal,” she added.

During her career, Steinhaus also refereed the 2011 women’s World Cup final, when Japan stunned the US, and the women’s final at the 2012 Olympic Games in London, when the Americans gained revenge over the Japanese. – AFP