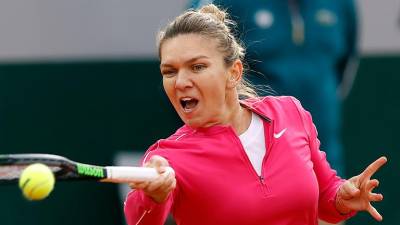 World No. 2 Halep arrived at Roland Garros having won her last three tournaments – two of them on claycourts in Prague and Rome – and started as the overwhelming favourite to add a second French Open title to her Grand Slam cabinet.

Halep, who skipped the US Open due to the COVID-19 pandemic, began strongly on Court Suzanne Lenglen, jumping to a 3-0 lead against an opponent she had beaten in all her previous seven meetings.

“It’s never easy to play against a Romanian and against Irina, we played so many times,” Halep, who turned 29 on Sunday, told reporters. “It’s never easy, she’s a very strong opponent and she’s also powerful, the serve is really strong.”

Despite the slow start, the 73rd-ranked Begu refused to give up and switched to a more attacking gameplan and it paid dividends as the 30-year-old got the set back on serve with a break for 4-3.

Halep had to dig deep and the 2018 champion got the second break in the eighth game and then held serve to win the opening set.

Begu hit seven more winners than Halep in the match but also had 15 more unforced errors, and a second service break was enough for Halep to secure the second set and a spot in the third round.

Halep had played under the closed roof of Court Philippe Chatrier in her opening match and said she struggled in the heavier and slower conditions on the uncovered court.

“Today I really felt it’s very slippery at the back of the court because there was no roof,” said Halep, who managed to get 80% of her first serves in during the match.

“It’s different, I have to say it. But anyway it is nice here, every court is beautiful so I am ready to face anything.”

The Wimbledon champion hit her 15th winner on matchpoint and will next meet American teenager Amanda Anisimova, who earlier demolished compatriot Bernarda Pera 6-2 6-0.

Cecchinato, ranked 110, famously beat Novak Djokovic on his way to a semifinal appearance at Roland Garros in 2018.

Stefano Travaglia continued Italy’s strong showing in the French Open men’s singles as he knocked out Japan’s Kei Nishikori in five sets in the second round on Wednesday.

Travagalia, ranked 74th, was one of six Italian men to reach the second round, the highest number in the professional era. – Reuters