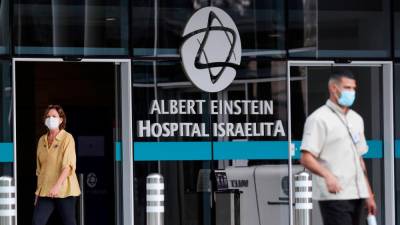 SAO PAULO: Brazilian soccer legend Pele left a Sao Paulo hospital after several weeks on Thursday, and a hospital bulletin said he would undergo chemotherapy following the removal of a colon tumor.

Pele had been hospitalized for nearly a month, checking in for routine exams before undergoing a Sept. 4 operation to remove the tumor.

He was in and out of the Albert Einstein Hospital’s intensive care unit in the days after surgery, with social media posts from his family assuring fans he was recovering well.

The hospital said in a Thursday bulletin that he was stable and cleared in the morning to leave the hospital, but would “continue with chemotherapy.”

Pele left the hospital early in the evening, according to a person familiar with the matter.

The Santos, Brazil and New York Cosmos player will turn 81 on Oct. 23. Pele is the only man to win three World Cups as a player.

On Wednesday, his daughter Kely said that he was expected to be discharged.

“Now that he’s stronger and leaving the hospital to continue recovering and treating himself at home, I’m going back home,“ Pele’s US-based daughter said on social media. –Reuters