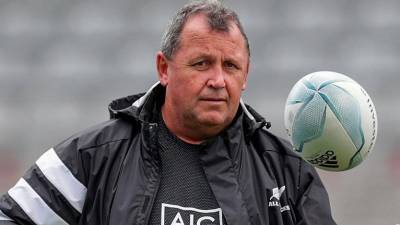 SYDNEY: New Zealand coach Ian Foster (pix) got another reminder of just how high expectations are for the All Blacks after his team’s record victory over Australia in the opening match of the Tri-Nations on Saturday.

Despite the clinical win and ensuring the Bledisloe Cup would remain on the eastern shores of the Tasman Sea for an 18th straight year, the first question he faced in his news conference was about areas that needed improvement.

“Rather than talk about any areas of concern, I thought the thing that worked well for us was our game management,” the 55-year-old pivoted with the deftness of the flyhalf he was during his playing days.

“I thought you saw a patient All Black performance in the first half. Sometimes we are guilty of overplaying situations but in the wet conditions, that’s the area I’m most proud of.”

Pulling the strings for the All Blacks at flyhalf in the 43-5 victory was Richie Mo’unga, who was an easy choice for Man of the Match after scoring two tries and kicking 13 points from the tee.

Foster was quick to pay credit to the other players in the backline and said it had been particularly pleasing to see Beauden Barrett slotting into the playmaker role from fullback when the opportunity arose.

“I thought Richie, that was probably one of the best game management games I’ve seen him play for us for a while and Beauden’s a class player whether at 10 or 15,” Foster said.

“The fact is that we’ve got two good options there which is very exciting.”

Foster was delighted that the All Blacks had been able to secure the Bledisloe Cup on Australian soil for the first time since 2009 against a Wallabies side they had developed a healthy respect for over three tests this month.

“I think for us to play that well over here is something to be pretty proud of,” he said.

“The only reason you enjoy trophies like this is that you’ve got fear factor for the opposition.

I know that’s a tough result for them but I thought they showed a lot of determination and energy. (Enough) to show there’s something building there that will ensure the next fixtures against them will be as tough.” – Reuters

Napoli pays tribute to Maradona, ‘captain of the angels’

Marriage made in heaven