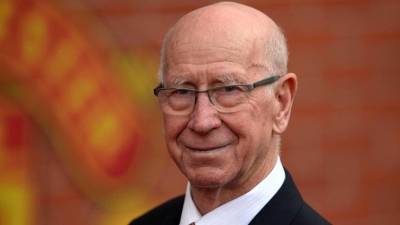 LONDON: Manchester United showed support for club legend and England World Cup winner Bobby Charlton (pix) after it was revealed the 83-year-old has been diagnosed with dementia.

The Telegraph said Charlton’s wife Norma had given her “blessing” for the condition to be reported in breaking the news on Sunday.

In July, Charlton’s brother Jack died having previously being diagnosed with dementia.

The pair, along with his brother Jack, were members of England’s 1966 World Cup-winning team.

“Everyone at Manchester United is saddened that this terrible disease has afflicted Sir Bobby Charlton and we continue to offer our love and support to Sir Bobby and his family,” United said in a statement.

A study, led by consultant neuropathologist Dr Willie Stewart of Glasgow University and published in 2019, revealed that former footballers are approximately three and a half times more likely to die from neurodegenerative disease than the general population.

Football’s lawmakers IFAB have given the go-ahead for a trial from January of an additional substitution to be offered to coaches if a player has to be replaced due to a suspected concussion.

Charlton is regarded as one of England’s best ever midfielders and is an icon at Old Trafford.

He held England’s goalscoring record of 49 for close to 50 years until it was broken by Wayne Rooney.

Rooney also took Charlton’s United record when he passed the 249 goals he scored for the club.

“Yet another hero of our 1966 World Cup winning team has been diagnosed with dementia. Perhaps the greatest of them all, @SirBobby. This is both very sad and deeply concerning,” former England striker Gary Lineker wrote on Twitter.

Charlton’s 249 United goals came across 758 games for the club, with his England goals coming in 106 appearances.

A survivor of the Munich Disaster in 1958 that killed several United players in a plane crash, Charlton helped revive the team in the wake of the tragedy.

He famously scored two goals when United beat Benfica to win their first European Cup in 1968.

REAL MADRID – An Italian club back after Mariano DIAZ

‘Bale might have a big say against Chelsea’ – Mourinho keeping Tottenham star ‘up his sleeve’ ahead of London derby, says Hoddle