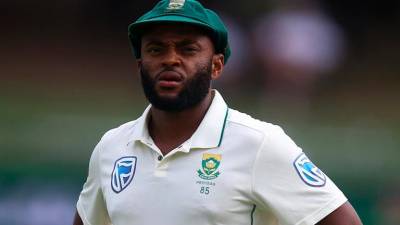 Bavuma will debut in the role when South Africa start a three-match One-Day International home series against Pakistan on Friday, which will be followed by three Twenty20 matches in the build-up to the T20 World Cup in India later in the year.

The batsman takes over from wicketkeeper Quinton de Kock, who has given up the captaincy in all three formats.

“It was a big choice to make and we must give Temba some time to find his feet,” Boucher told reporters on Thursday.

“His preparation has been fantastic, the way he has spoken to the guys. We feel it is very exciting times for us with him as captain and we are just looking forward to getting onto the field and playing.”

South Africa have not competed in international cricket since a test and T20 tour of Pakistan ended in mid-February, and Boucher said he had been working on adding shots to his batsmen’s armoury to assist in spinning conditions.

“There is a lot we have been working on to upskill players. It is about giving guys different options to score 360 (degrees around the wicket),” he said.

“That will take time. You don’t just put a guy into the nets and teach him how to sweep and reverse sweep in one session. They need to get the confidence to do it in match situations.”

“We planned for it, India and South Africa have had a long-standing agreement to release players for the IPL,” Boucher added.

“The good part of it is they will go there to play in a good competition against strong opponents, and will get first-hand info on the venues in India.” – Reuters