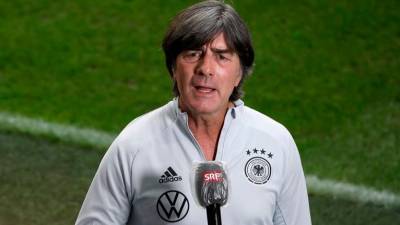 BERLIN: Four-time World Cup winners Germany’s defeat to North Macedonia sparked calls on Thursday for coach Joachim Loew (pix) to stand down instead of waiting till after this summer’s European Championship.

Goran Pandev had put North Macedonia ahead in Wednesday’s 2022 World Cup qualifier just before half-time and although Ilkay Gundogan equalised from the penalty spot early in the second half, the minnows snatched victory when Eljif Elmas scored a late winner in Duisburg.

Loew, who led Germany to glory at the 2014 World Cup but has suffered a string of poor results almost ever since, had announced last month that he will stand down after Euro 2020.

Bild, Germany’s most-read newspaper, said that decision should be reversed after the loss to the world’s 65th-ranked team.

“It’s over Jogi,” it said in its headline. “The magic that Loew conjured up during the World Cup (in 2014) has unfortunately disappeared. His achievements for German football cannot be questioned but his time has gone,” the paper said.

Loew has tried to forge a young new team without veteran stars such as Thomas Mueller and Jerome Boateng that he discarded after early Germany’s early elimination from the 2018 World Cup in Russia.

Kicker magazine said the rebuilding project was not working.

“This newly formed German national team is still looking for direction and trying to find its way… both in the players’ legs and heads,” it said.

Kicker said Loew’s explanation that his players were “tired” simply “does not stand up… against opponents of that level”.

And Sport1 website said the team had “dishonoured itself”, and was particularly critical of Chelsea forward Timo Werner who missed an open goal.

“Some players are not reaching their usual level,” the website said.

The performance will only add fuel to the argument that 31-year-old Mueller, who is again in good form this season after leading Bayern Munich to victory in the 2020 Champions League, be recalled for the Euro finals this summer when Germany face a tough first-round group of reigning champions Portugal, World Cup holders France and Hungary.

“Mueller should be in the team, he can still score goals and he can help any team in the world to get out of difficult situations,” Hoeness said.

Loew meanwhile insisted he had not lost faith in his team for the Euro – and he urged Germans not to either.

“We must not lose belief,” Loew said. “In the coming days and weeks we will check over everything once again.” – AFP