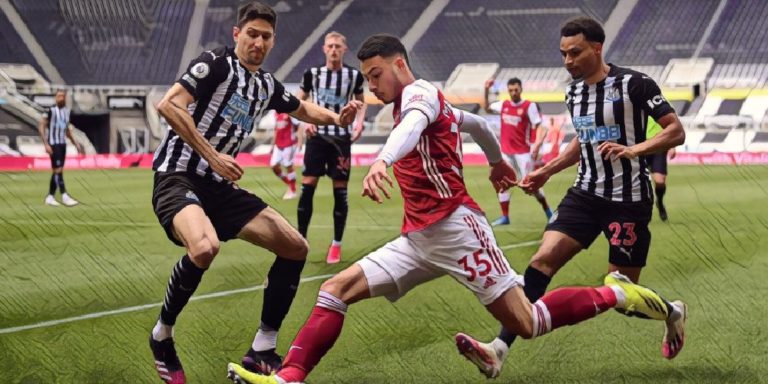 Arsenal moved back into the top half of the Premier League with a comfortable 2-0 win over Newcastle at St. James Park.

It has been a wildly inconsistent season for Mikel Arteta’s side, Arsenal coming into the game in 11th and set for their lowest league finish since 1995. Despite that though, they could yet claim a place in next season’s Champions League by winning the Europa League, though came into Sunday’s match having slipped to a 2-1 loss in the first leg of their semi-final with Villarreal on Thursday.

Arteta made eight changes to the side that lost in Spain, and the XI that he sent out quickly took the lead in the opening five minutes.

David Luiz played the ball over the top of the Newcastle defence to Hector Bellerin who cut the ball back in-towards Pierre-Emerick Aubameyang. The Gabon international completely miscued his attempt on goal, however, the ball sat up nicely for Mohamed Elneny on the edge of the box who fired through the crowd of players in the box to register his first-ever Premier League goal.

Newcastle were poor for large spells of the first half as they really struggled to get a foothold in the game, though came out with much more positivity and intensity after the break.

Despite that intensity though, they were unable to really test Gunners stopper Mat Ryan, with the visitors doubling their advantage 20 minutes into the second period. Some slick interplay in the Newcastle half saw the ball fed out to Gabriel Martinelli down the left before the Brazilian youngster fizzed an inviting cross across the box which met by Pierre-Emerick Aubameyang who steered it home from three yards.

The Magpies would end the game with 10 men as Fabian Schar was shown a straight red card following a wild lunge from behind on Martinelli.

Despite the Europa League being Arsenal’s only real hope of securing European football next season, Mikel Arteta insisted that the club are still focusing on securing the highest possible finish in the Premier League.

“This game showed our focus is still there in the Premier League. We believe that anything is possible if you’re picking up points and we wanted to put bad results out of the way,” he told Sky Sports.

“We had a great attitude, some moments of real quality and had total control from the start.

“We refreshed the team because we’ve played so many games. Thursday was very demanding but the team was really committed and focussed on this game and that’s why we won.

“We controlled the game and we accelerated it when we needed to. The early goal gave us confidence which we needed after the defeat on Thursday.

“We have to do as well as we can and finish as high as we can.

“You need big performances and we had that today.”

David Luiz made his first outing in over a month, though was forced to be withdrawn shortly into the second half with another injury.

“It’s a shame because David had made a big effort.”

The post Arteta praises Arsenal ‘focus’ as they stroll to comfortable 2-0 win over Newcastle first appeared on The Football Faithful.