Barty battles past Zidansek in Madrid

Barty battles past Zidansek in Madrid 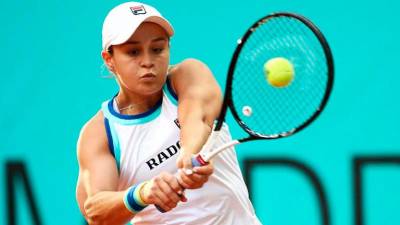 MADRID: World No. 1 Ashleigh Barty (pix) survived a scare at the Madrid Open on Saturday to beat Tamara Zidansek in three sets and reach the third round.

Barty was briefly rattled by Zidansek as she mustered only one game in the second set but the Australian recovered her poise in the decider to come through 6-4, 1-6, 6-3 in just under two hours at the Caja Magica.

Either Germany’s Laura Siegemund or the Swiss Iga Swiatek await Barty in round three. Swiatek would be a particularly intriguing match-up as it would bring together the 2019 and 2020 French Open champions.

Both will be among the favourites at Roland Garros next month, with Barty’s latest victory extending her unbeaten streak on red clay to 13 matches.

The No. 1 seed is bidding to win her fouth WTA title this year in Madrid, after already succeeding in Stuttgart, Miami and at the Yarra Valley Classic in Melbourne.

Few would have expected Zidansek, ranked 80th in the world, to push Barty close but the Slovenian held own from the back of the court and had the variety to keep her opponent guessing.

Barty claimed the first set, despite coming under pressure on serve at 2-3, when a superb retrieval staved off an early Zidansek attempt to break serve.

Zidansek was more aggressive in the second and broke twice, the second time for 5-1 with a stinging backhand down the line.

But she was caught cold in the third, as Barty stormed into a 3-0 lead before serving out at 5-3 when a Zidansek forehand hit the tape. – AFP