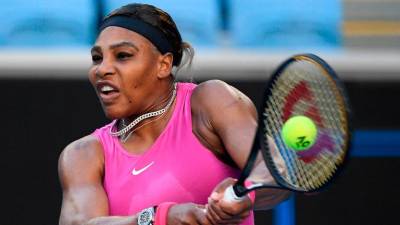 The 39-year-old Williams has already seen two of her likeliest title challengers, who have both beaten her in major finals in recent years, either fail to start the tournament or pull out in unprecedented circumstances.

World No. 3 Simona Halep, the 2018 Roland Garros champion who defeated Williams a year later in the Wimbledon final, withdrew before the event with injury.

The biggest story of the French Open so far has undoubtedly been world No. 2 Naomi Osaka’s shock withdrawal after a press boycott, saying she has been suffering with “bouts of depression” since her breakthrough victory over Williams in the controversial 2018 US Open showpiece match.

Serena, who has been one short of Margaret Court’s all-time record of 24 Slams since winning the Australian Open four years ago, faces Romania’s Mihaela Buzarnescu on Wednesday in the second round.

The American, seeded eighth, saved two set points in the first set of her opening win over Irina-Camelia Begu – the first ever Roland Garros night match.

“I have to say it was pretty cool to be able to play the first night session ever here at Roland Garros. That was something I thoroughly enjoyed,” said Williams, who is back on Chatrier but during the day session against Buzarnescu.

That means she will play in front of a crowd for the first time this week, as the night sessions are currently being played behind closed doors due to the French government-imposed 9pm curfew.

“I wasn’t sure why there wasn’t a crowd,” said the three-time French Open champion.

“I guess it was because there’s curfew at 9. It’s definitely a little different. Ironically enough night sessions are not my favourite matches, but I do have a good record at it.”

In the men’s draw, second seed Daniil Medvedev will be hoping to back up his first-ever French Open win by going deep into the tournament.

The two-time Grand Slam runner-up is in the half of the draw without any major champions – with Dominic Thiem dumped out at the first hurdle and Novak Djokovic, Rafael Nadal and Roger Federer all in the opposite side.

The Russian, who had lost in the opening round on all four of his previous appearances, will face Tommy Paul of the United States for a place in round three in the evening match.

“My opponent can see I was really feeling good,” said Medvedev after his straight-sets victory over Alexander Bublik.

“I actually played much better in practice still than today, so there is room for improvement.”

Despite Medvedev’s loftier ranking, Greek fifth seed Stefanos Tsitsipas is probably the favourite to reach the final from the bottom half.

The 22-year-old lost an epic five-set semifinal in Paris last October to Djokovic and also made the last four of the Australian Open in February.

Tsitsipas has been in excellent form on clay this year, winning the Monte Carlo Masters, the ATP event in Lyon and reaching the Barcelona Open final, where he lost to Nadal despite holding a match point.

He will take on 103rd-ranked Spaniard Pedro Martinez in round two.