Liek Hou through to semis

Liek Hou through to semis 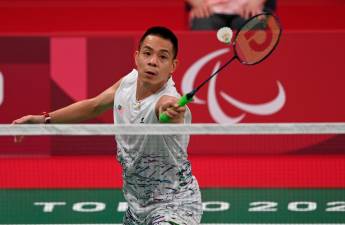 TOKYO: Six-time world badminton champion Cheah Liek Hou (pix) has booked his place in the last four of the Tokyo Paralympics after another convincing win in his second Group B match today.

Liek Hou, who is competing in the men’s singles SU5 (physical impairment) category, was in stunning form as he defeated Jen Yu Fang of Chinese Taipei 21-13, 21-9 at the in Yoyogi National Stadium here.

“I think I finally found my rhythm, thanks to a great challenge posed by Yu Fang. I was trailing 2-5 in the second game and that was when I found my rhythm as I managed to reel him in en route to winning it. I hope to get a third win tomorrow (Sept 3) and top Group B,” he told reporters.

The second seed will complete his group fixtures against Japan’s Taiyo Imai tomorrow.’

Meanwhile, it was a Paralympic debut to forget for Didin Taresoh as he failed to qualify for the semi-finals after suffering a double blow in today’s men’s singles SH6 (physical impairment) Group B matches.

Not only did he lose his opening match to India’s Krishna Nagar, 20-22, 10-21, injury later forced the dwarf-sized Sabahan to retire while trailing 13-21, 13-18 in his second group game against Brazil’s Vitor Goncalves Tavares in the evening.- Bernama