Frank Lampard has shed light on his clash with Jose Mourinho in Chelsea’s recent game against Tottenham – while promising not to get involved in any confrontation with Roy Hodgson when they play Crystal Palace.

Chelsea boss Lampard and Spurs chief Mourinho were caught in a touchline exchange during Tuesday’s Carabao Cup clash, won by Tottenham on penalties.

Mourinho later insisted he was trying to give Lampard advice on how to support his players from the dugout – and now the Chelsea manager has offered an outright dismissal of that claim.

“I don’t think any remarks made on the touchline during a game can be called advice,” said Lampard.

“They can probably be wrapped up as advice after a game when you manage to get back in the game and win on penalties. So I don’t think that’s the case.

“I would always be happy to take advice not just from fellow managers, but also my players, my staff, people I respect and listen to in football, outside football, and in life. I think that’s what moulds you as a manager.

“So I don’t think that Jose incident was ever advice; it wasn’t that.

“I think on the line if you look like you are forced and trying to be what might be perceived as arrogant, for what that looks like, or trying to portray a character, I think that’s something that can become maybe not real, or maybe boring from the outside.

“I certainly don’t do that, I just react as I see fit in the game, in the competitive nature sometimes you can reflect and go ‘was that too much or not’. That’s fine.

“I don’t think people should expect to not get caught up in the excitement and that was just it. It was no big deal.”

“When I talk about people putting on a character or not, Roy has been an incredibly straight-down-the-line manager, person, coach; his career is something that’s beyond exceptional,” said Lampard.

“I’ve got so much respect for Roy Hodgson in the job he’s done and the way he carries himself.

“I don’t want to pre-empt it but there’ll be no touchline spats with me and Roy tomorrow, because I’ve got too much respect for him and I think he’s just brilliant as a man.”

Christian Pulisic is finally fit enough to make Chelsea’s squad for the first time this season for the Eagles clash, having shaken off a niggling hamstring injury.

Lampard said the USA forward is not fit enough to start, but the Chelsea boss is excited to see his new number 10 back in action.

“Pulisic is in the squad for tomorrow; he won’t start the match because of the injury he’s had, and it’s been a difficult injury,” said Lampard.

“Hakim Ziyech is getting closer, but he’s not quite fit enough to be on the bench.”

Lampard tells Chelsea to ‘stick together’ 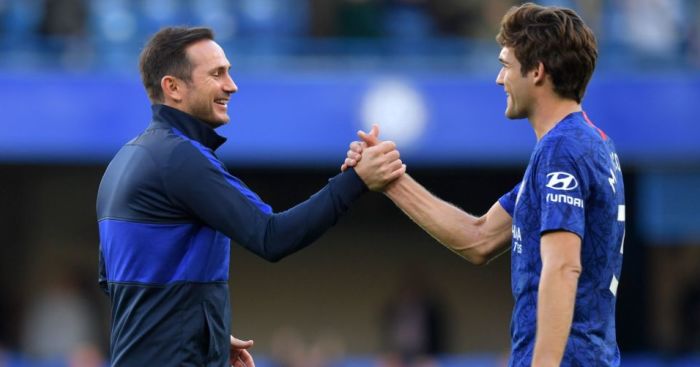 Lampard also warned his Chelsea players not to hold any grudges in the wake of Marcos Alonso’s half-time substitution at West Brom.

Alonso was hooked at the interval at the Hawthorns with Chelsea 3-0 down and boss Lampard forced to chase the game.

Chelsea rallied for a 3-3 draw but Lampard is understood to have given Alonso a dressing down for attempting to watch the second half of the match from the team bus.

Full-back Alonso is among a nucleus of Chelsea players with uncertain futures, with a number of them able to leave before Monday’s transfer deadline.

Lampard refused to outline the situation with Alonso at West Brom, but insisted the matter is now closed.

“I’m not going to disclose what goes on in the dressing room, I think that would be wrong, so that was it,” said Lampard.

“It was a game where we were disappointed to be 3-0 down at half-time, I had to make changes.

“And all I ask from all the players is that, for good or for bad, the players stick together in every moment. Because that’s the only thing that brings a successful group.

“So that’s as much as I’ve got to say on it and it doesn’t affect anything ongoing.

“I cannot have grudges or feelings in games that carry on.

“We work, we’re honest with each other, and we carry on working to get better and better.

“And things happen during the course of the season, they happen a lot.”

Mount missed the decisive penalty as Chelsea lost 5-4 on spot-kicks in Tuesday’s Carabao Cup clash at Tottenham, with the tie 1-1 at full-time.

And Lampard has revealed he has told Mount not to fret over the penalty miss.

“Everybody rallied round Mason as they would any individual in the team,” said Lampard.

“I’ve been the penalty misser and the one in the squad when someone misses. That’s standard, that’s how it is.

“I think Mason’s biggest disappointment is the feeling that he may have let his team-mates or myself or staff down, but it’s absolutely the opposite.

“What Mason’s done since he’s got in, a young boy who’s been desperate to play for Chelsea in all his young life, and got in and been fantastic for us over the last 18 months.

“And missing a penalty in a round of the Carabao Cup to get knocked out is par for the course for someone of Mason’s young talent, that will go on to play many a game as important, more important, have critical inputs into games, much more important, and I’m not trying to belittle the game but I’m just talking about how his career’s going to go.

“So he’s supported by everybody at the club and we all move on.”