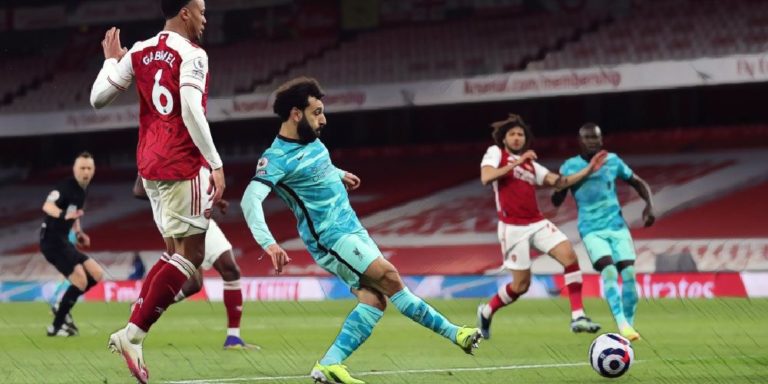 Arsenal’s utterly forgetful season continued as they put in a woefully below-par performance to slip to a much deserved 3-0 loss to Liverpool at the Emirates on Saturday evening to leave Mikel Arteta visibly furious.

Liverpool were far the brighter and more positive, the visitors playing with aggression and positivity as they pinned Arsenal back for the vast majority of the first half.

For all of their domination though, the reigning Champions were unable to create too much in the shape of clear cut chances before the break.

Jurgen Klopp brought Diogo Jota into the action on the hour mark, and within four minutes of his introduction, the Portuguese had given his side the lead. Trent Alexander-Arnold – fresh off the back of his exclusion from the England squad – put in an absolute peach of a cross to the back post, with Jota’s header being too powerful for Leno who got a hand to it but couldn’t keep it out.

The Gunners had shown a bit more positivity in the opening stages of the second half, but in the 68th minute they would find themselves two down. Mohamed Salah ran onto a clipped ball from Thiago, beat Gabriel Magalhaes for pace down the right before the Egyptian confidently slotted it through the legs of Leno.

Liverpool extended their lead with eight minutes to play, Gabriel sloppily giving the ball away to Alexander-Arnold which was swiftly capitalised upon by the visitors, the ball being rolled across the box by Salah before it was ruthlessly dispatched by Jota for his second of the game.

With the likes of Bukayo Saka, Emile Smith Rowe and Granit Xhaka missing through injury, and with Kieran Tierney being forced off at the end of the first half, Arsenal were a long way off the pace and rarely looked like troubling Liverpool ‘keeper Alisson Becker.

All four of said matches have come under Mikel Arteta! pic.twitter.com/duC52aUwq2

The result leaves the north London side languishing in ninth on 42 points after 30 league games, and speaking afterwards, Mikel Arteta was visibly furious with his side’s display.

“We completely deserved to lose the game,” the Spaniard told Sky Sports. “They were better in every department and deserved to win the game with the margin they had, or even more. I accept responsibility for the way we played today.

“They made the right decisions, we didn’t. It is my fault. I have to set the team up to perform in a different way and that is it. Congratulations to Liverpool because they were exceptional today. That showed the difference between the two teams – that when they play at that level, the margin is incredibly high.

“I don’t have to use any excuses – that we don’t have five or six players – the standards are much higher at this football club and I have to get them to perform at that level. It was technical as well. We gave every ball away and could not put three passes together. The basics weren’t there today. If you do that against this kind of opponent, you get punished like we have.

“At the moment I am in shock. I didn’t expect that because of the way the team trained. It is a challenge. A challenge brings an opportunity. If you have courage and you represent a club like this, you have to stand up and take it.”

Moments that made the Premier League: Collymore sinks Newcastle in Anfield epic

See also – Keep your enemies closer: Five of the biggest feuds between teammates in football

The post ‘Completely deserved’ – Arteta says Arsenal lacked the ‘basics’ as he is left furious at 3-0 loss to Liverpool first appeared on The Football Faithful.