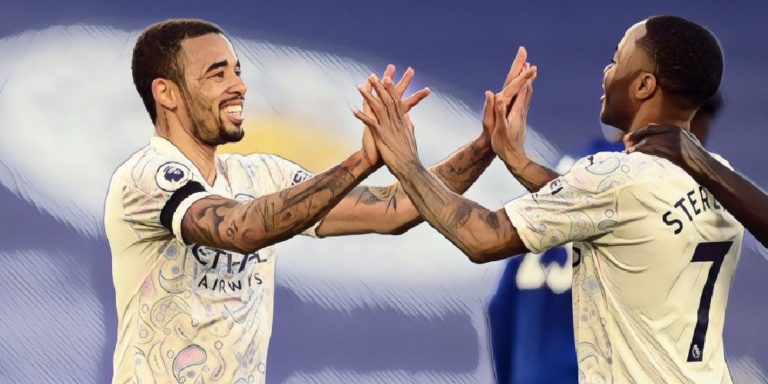 Manchester City moved to within 11 points of the Premier League title with a relatively comfortable 2-0 win against third-placed Leicester at the King Power Stadium.

It was virtually wall-to-wall domination from Manchester City right from the off, and they thought they had taken an early lead as Fernandinho rifled home from distance, only for the goal to be ruled out due to Sergio Aguero being in the line of sight of Kasper Schmeichel while in an offside position.

Kevin de Bruyne saw a free-kick crash off the bar while Schmeichel made a couple of smart saves to deny the league leaders, while Jamie Vardy saw an effort ruled out for offside in a rare Foxes attack on the stroke of half time.

City continued their domination after the break and they finally got their reward just before the hour mark, a Leicester clearance from a Rodri cross only falling to the feet of left-back Benjamin Mendy, the French international showing composure on the ball to shift onto his supposedly weaker right foot, before calmly stroking home.

The champions-elect extended their lead in the 74th minute, and it was the wonderful Kevin de Bruyne who was instrumental in the goal’s creation. The Belgian played a perfectly weighted, defence-splitting ball into Gabriel Jesus who squared it to Raheem Sterling. The England man couldn’t quite get a shot away so opted to play it back to the Brazilian forward, who prodded home from six yards.

Leicester were improved in the second half, with the returning James Maddison squandering a couple of late chances to reduce the arrears, though all-in-all, it was a thoroughly deserved three points as Pep Guardiola’s side march towards a third league title in four years.

The win leaves them 17 points clear of second-placed Manchester United – although the Red Devils still have two games in hand – and speaking afterwards Pep Guardiola said his side are much more ‘patient’ than the side that lost 5-2 in the previous meeting between the two sides, a game that saw City give away three penalties.

Kevin De Bruyne made 14 ball recoveries vs Leicester, no Man City player has made more in a single Premier League game this season.

“They are an incredible team, we suffered at home against them but we are more patient and it is a big step to winning the Premier League,” he told Sky Sports.

“You never know after an international break but I trust my players. The players don’t always believe me but I like every one of them, today I trust some of my players who haven’t played for a while. When you are winning, winning, the guys who play know they have to play good to play again. There is good solidarity between the players.

“The Premier League is the nicest competition [to win], it is 11 months and it is so tough. We are close. We need three more wins.”

The game saw Sergio Aguero make just his fourth league start of the season, and having struggled with injuries, the Argentine was offered 60 minutes of action.

“Sergio Aguero is fine, his knee is perfect,” Guardiola added. “He needs the rhythm of games but we need players fresh. I am delighted the way he trained this week, nothing is going to change. Maybe one day we will need the one goal to win something and he will be there.”

Next up for City is a meeting with Borussia Dortmund in the Champions League, before they face Leeds United in the league next weekend.

Journeymen: The six players to have played for seven or more Premier League clubs

The post Guardiola praises ‘patient’ Man City as they take a ‘big step’ towards title with Leicester win first appeared on The Football Faithful.