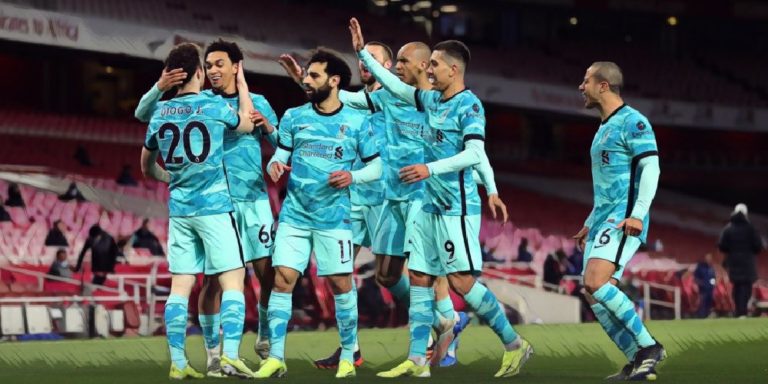 Liverpool gave their top-four hopes a major shot in the arm as they picked apart a disappointing Arsenal to run out 3-0 winners at the Emirates on Saturday night.

Liverpool‘s struggles this season have been well publicised, but they were by far the brighter and more positive, the visitors playing with aggression and positivity as they pinned Arsenal back for the vast majority of the first half.

But for all of their domination though, the reigning Champions were unable to create too much in the shape of clear cut chances before the break.

Jurgen Klopp introduced Diogo Jota to the action on the hour mark, and within four minutes of his introduction, the Portuguese had given his side the lead. Trent Alexander-Arnold – fresh off the back of his exclusion from the England squad – put in an absolute peach of a cross to the back post, with Jota’s header being too powerful for Leno who got a hand to it but couldn’t keep it out.

The Gunners had shown a bit more positivity in the opening stages of the second half, but in the 68th minute they would find themselves two down. Mohamed Salah ran onto a clipped ball from Thiago, beat Gabriel Magalhaes for pace down the right before the Egyptian confidently slotted it through the legs of Leno.

Liverpool rounded off the scoring with eight minutes to play, Gabriel sloppily giving the ball away to Alexander-Arnold which was swiftly capitalised upon by the visitors, the ball being rolled across the box by Salah before it was ruthlessly dispatched by Jota for his second of the game.

Diogo Jota has scored more goals off the bench than any other Premier League player this season (4).

Jurgen’s super-sub does it again. pic.twitter.com/NMA63UibX5

“Very good. A top, top game,” he told Sky Sports. “Our counter-pressing was at the highest level which is very important. In general, the defending from the whole team looked exactly as it should. I’m really happy with the whole performance and more so the three points.

“We are slightly used to [not scoring early on]. It is our year if you like – we have not scored with our first chances. [James Milner] didn’t score with a sitter pretty much. He thought the same! We have to work hard and try more often and all these kinds of things. Obviously we brought on Diogo [Jota] who is in very good shape. He stretched things. He played lots for Portugal that is why he didn’t start.”

The German was effusive in his praise of Alexander-Arnold before the game, and his belief was repaid with the 22-year-old’s delicious assist for the opener.

“Then we scored these wonderful goals and Trent Alexander-Arnold showed his class, again. I don’t want to make another discussion about Trent or stuff like that. I said it was Gareth [Southgate’s] decision. He is blessed with the choice he has in that position especially but Trent is in a good shape. If somebody says he is not then I have to say he is wrong, that is all. I am not responsible for his decisions.”

Asked about the race for the top four in their final eight games of the season, he added: “We don’t look at Chelsea or West Ham or whatever because we have to win our games but in our situation, other teams need to lose because we don’t play Chelsea again or Leicester and all these things. We have to keep working and that’s what we do. It’s a nice time.

“Tonight the package was extremely good and that’s what you need. You defend up front and deep as well. We got space for the counter-attack and everything. It was really good.”

Next up for Liverpool is their Champions League quarter final first leg against Real Madrid before they host Aston Villa next weekend.

Moments that made the Premier League: Collymore sinks Newcastle in Anfield epic

See also – Keep your enemies closer: Five of the biggest feuds between teammates in football