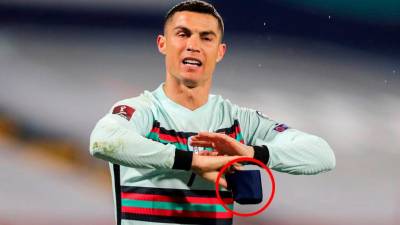 BELGRADE: The captain’s armband which Portugal’s Cristiano Ronaldo threw away angrily during a World Cup qualifier against Serbia was bought by a betting company at a charity auction to help fund life-saving surgery for a six-month-old baby.

Serbia’s Mozzart said in a statement on Friday that it paid US$75,150 for the armband picked up by a fireman at Red Star’s Rajko Mitic stadium.

“We decided to take part in the auction because of its humanitarian nature,” Mozzart said.

“The objective was to aid toddler Gavrilo Djurdjevic as well as to raise awareness that we need to stand united in taking this kind of action.”

Six-month-old Gavrilo Djurdjevic is suffering from spinal atrophy and his mother Nevena said the family had received donations of around US$587,900 so far.

Ronaldo stormed off the pitch seconds before the final whistle in Serbia’s 2-2 home draw with Portugal on Tuesday and threw the armband away when he was denied a clear stoppage-time winner in the 2-2 draw.

Television replays showed Ronaldo’s shot had crossed the line before Serbia defender Stefan Mitrovic cleared it but with no goalline technology in place, the officials waved play on and then booked Ronaldo for dissent. – Reuters