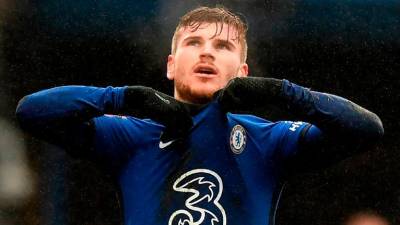 Werner’s failure to tap into an open goal in the 2-1 loss to North Macedonia was crucial to Germany losing a World Cup qualifier for the first time since 2001 on Wednesday.

The 25-year-old has managed just two goals in 31 games for club and country since a brace in Germany’s 3-1 win over Ukraine on November 14.

With Werner’s first season at Chelsea after his move from Leipzig turning into a disaster, Chelsea boss Tuchel said he banned the forward from extra finishing practice on Thursday to protect his fragile morale.

“This guy has scored goals since he was five years old, and he never stopped, so he can trust that his brain and his body remembers to do that because it is absolutely usual for him to score,” Tuchel said on Friday.

“So it will come back; it is just a matter of time. But it is much easier said than done because for me this is the moment not to think about it and not to read about it, and not even to train extra.

“Yesterday I sent him in from training because he wanted to do some finishing with us. I just sent him in.

“I said ‘you don’t need that, your body, your brain knows how to score; you did it since you were five years old so don’t worry, it will come’.”

Despite 10 games without a goal for club and country, Tuchel confirmed Werner will start Chelsea’s Premier League clash with West Bromwich Albion at Stamford Bridge on Saturday.

Making an unusual analogy with dating, Tuchel offered support for his misfiring star.

“If a woman does not want to go out with you to dinner, you cannot force her to, you just step a little bit back and maybe she will call you up. So the goals will come,” Tuchel said.

“But of course he needs to do something for it, and the best thing to do is not to think about and work hard.

“Work hard against the ball, work hard, be reliable with the ball, do your runs, don’t hesitate and be fearless.

“This is how I see it. He will start tomorrow and here we go.”

Werner’s only goals in 2021 came against Morecambe in the FA Cup and Newcastle in the Premier League.

But Tuchel urged him to ignore criticism on social media and any nagging doubts in his own mind.

“It’s an easy solution at the moment to point the finger at Timo which I cannot fully understand, and I will not accept.

“Yes, he is in a moment where he lacks confidence, where things are not too easy.

“The ball simply does not work out like it usually works out, but he works hard for us.” – AFP