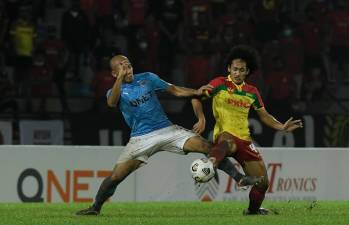 The Nigerian-born player headed in a pass from Karsten Nitzel to equalise in the 89th minute, and a powerful cross by the former took a deflection before beating goalkeeper Kalamullah Al-Hafiz Mat Rowi in injury time for the winner.

PJ City FC had opened the scoresheet through a left-footed shot by V. Ruventhiran from outside the penalty box in the 25th minute.

Meanwhile, Perak FC came up short once again, losing 1-2 to Sabah FC at the Likas Stadium in Kota Kinabalu.

The Bos Gaurus squad took the lead through a mesmerising free-kick from Nazirul Naim Che Hashim in the 27th minute, however, they could not hold the fort as former national striker Mohd Amri Yahya equalised in the 65th minute.

Gabonese import player Levy Madinda then produced a beautiful free-kick of his own, beating goalkeeper Muhammad Hafizul Hakim Khairul Nizam Jothy to score the winner in the 79th minute.

Meanwhile, substitute A. Selvan emerged hero for Negeri Sembilan FC as his goal in the 75th minute gave the team a 1-0 win over PDRM FC at the Kuala Lumpur Football Stadium in Cheras

The Ghana import scored two penalties, namely in the fourth and 32nd minutes, before completing his hat-trick in the 69th minute, with Argzim Redzovid also scoring for the home side, while Kelantan United FC’s only goal was scored by Alfusainey Gassama in the 40th minute.- Bernama