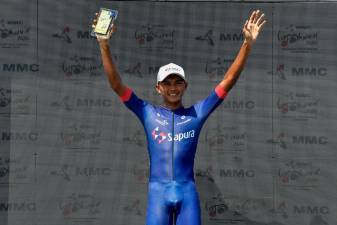 KUALA LUMPUR: Terengganu Cycling Team (TSG) cyclist Muhammad Nur Aiman Mohd Zariff created a surprise when he won the orange jersey after being crowned King of the Mountains in the first stage of the Tour du Rwanda 2021 today.

The 23-year-old dominated the first-stage mountain zone that started at Kigali Arena, Kigali and ended at Rwamagana over a distance of 115.6 kilometres (km).

“I am very satisfied with my first day’s performance and hope that I will be able to retain this jersey throughout the remaining seven days (of the tour),” the Setiu-born cyclist said at the end of the stage.

The Petronas Le Tour de Langkawi (LTdL) 2020 King of the Mountains, however ended the first stage in 57th place.

His teammates Carlos Julian Quintero Norena from Colombia was in 26th place, followed by Metkel Eyob (Eritrea) in 36th while Artem Ovechkin of Russia and Goh Choon Huat of Singapore were in 50th and 56th place.