Manchester United supporters tumultuous relationship with the Glazers reached breaking point on Saturday as fans invaded the pitch at the Old Trafford stadium ahead of the match against Liverpool. This was result of a planned protest on behalf of the United fans to express their disapproval of the ownership.

Thousands of fans gathered outside the stadium with banners and smoke shouting out slogans against the Glazer ownership of Manchester United. Fans took to the streets on Sunday, a couple of weeks after United co-owner Joel Glazer was part of the team that backed the breakaway Super League. Despite the collapse of the Super League and the owners issuing an apology to the fans, the back stabbing initiative has not been received well. 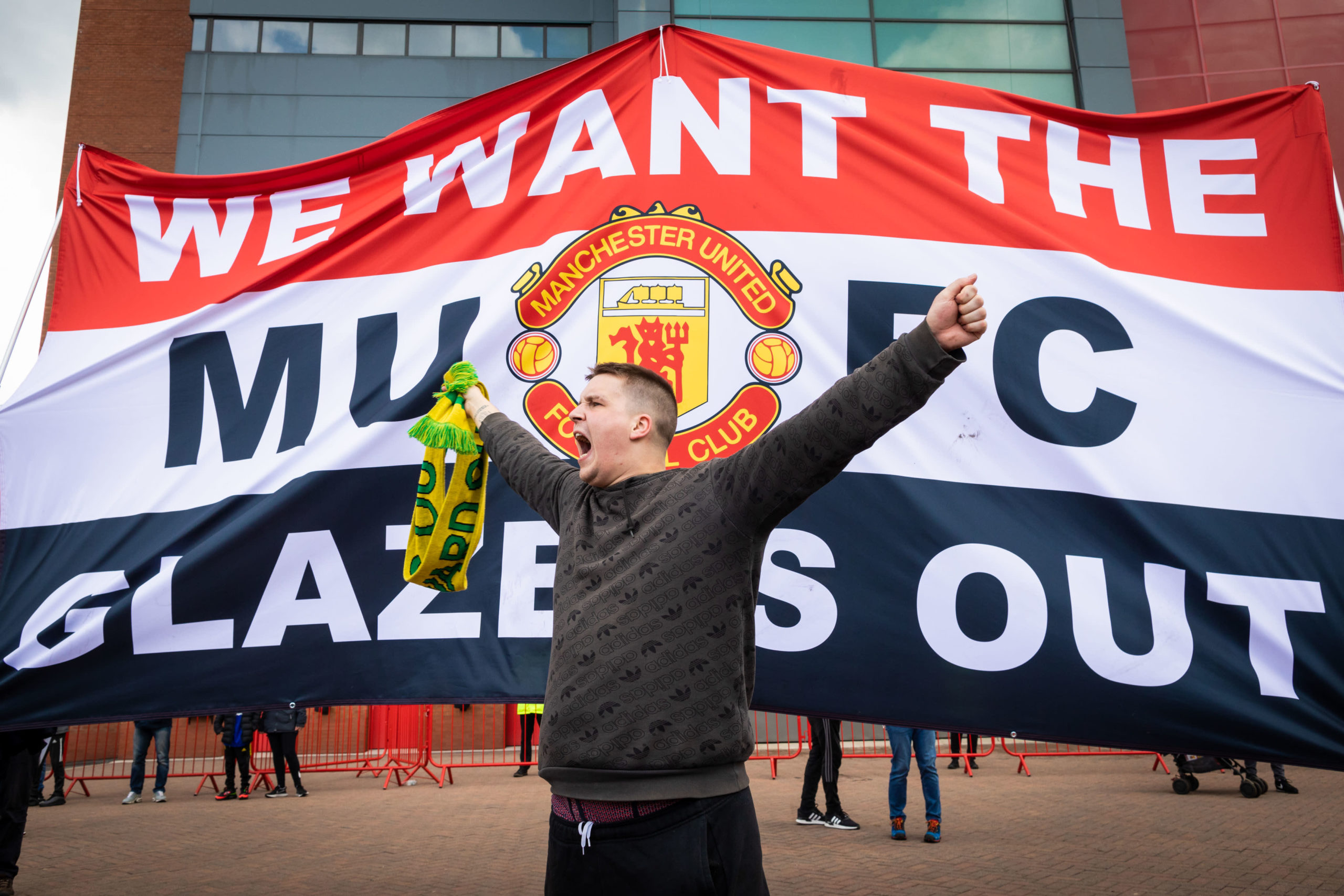 Old Trafford was engulfed with smoke and banners as fans lined up to protest against the Glazer ownership before their game against Liverpool on Sunday. Image Courtesy: CNBC

In the aftermath of Old Trafford being stormed and the resultant postponement of the United game against Liverpool, supporters have reiterated that the only way to stop the protests is for the American owners to engage with the fans.

The Manchester United Supporters Trust (MUST) have issued an open letter to Joel Glazer which includes a four-point plan to which they want a reply by Friday.

The letter read: First things first, let’s be clear that no one wants what happened at Old Trafford yesterday to be a regular event. We are football fans and we want to support our team. We do not want to spend our days off work, protesting outside our football ground. But what has happened was the culmination of sixteen years in which your family’s ownership of the club has driven us into debt and decline, and we have felt ever more sidelined and ignored. The letter further went on to highlight four points.

Fans demanded a government-initiated fan-led review into the current ownership structure of the club to make it more in favour of fans. They also asked for the appointment of independent directors whose job will be to protect the interest of the club and thus prevent operations that only benefit the shareholders.

The fans further demanded that the Glazer Family shareholding should be reduced to a minority or bought altogether and commit to consulting with season ticket holders on any significant changes to the future of the club.

WILL THE GLAZERS BUDGE?

Manchester United is the golden goose of the Glazers. The American owners have used the club as a cash cow to fund their various other business ventures. The scathing label that Gary Neville used to describe them was “Scavengers”. The Glazers aren’t averse to the criticism and disdain however, it has washed down as easily as water off a duck’s back since their takeover 15 years ago.

Manchester United supporters to pile pressure on the Glazer family to sell up with 10,000 fans set to attend Old Trafford protest prior to Liverpool clash after renewed outrage of European Super League planshttps://t.co/rtVHjVIHL5

It’s hard to picture the Glazers selling the club unless there is an outrageous offer on the table. Soon to resign CEO Ed Woodward did well to harness the worldwide commercial brand of the club thus enabling the Glazers to pull more lucrative dividends out from the club.

The protest on Sunday however will draw the attention of the owners in a way that hasn’t been achieved before. The boiling point certainly has been reached. The anarchy first at the training ground and now at the stadium will hugely demand a response. If the protests and boycotts are here to stay, we could finally witness few chinks in the Glazer armour, but it is certain it will take a lot more doing to achieve the message that lined up the Manchester streets on Sunday.

The post RETURN MY CLUB appeared first on FootTheBall.