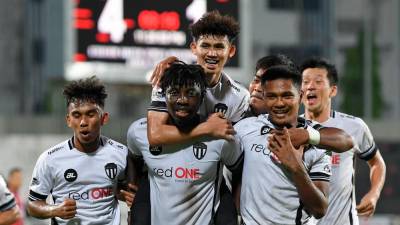 KUALA TERENGGANU: Terengganu FC II (TFC II)’s 4-1 drubbing of Kelantan United FC (KUFC) in the first round of the 2021 Premier League season here last night was all the more memorable for the squad as they were able to maintain a 10-match unbeaten run.

“They fought tirelessly to maintain the unbeaten record that I have dreamed of all this while. The credit should also go to Jordan Mintah who scored a hat-trick while the other players also played well.

“Alhamdullilah (Praise be with God), the players’ performance is improving from time to time,” he told reporters when met after the match.

The Ghanaian import scored two penalties, in the fourth and 32nd minutes, before completing his hat-trick in the 69th minute, while Argzim Redzovid also scored for the home side. Kelantan United FC’s consolation goal was scored by Alfusainey Gassama in the 40th minute.

This was TFC II’s third victory after beating the FAM-MSN Project squad in their first match last March and Johor Darul Ta’zim II (JDT II) in mid-April and recorded seven draws to take the third spot in the league.

Meanwhile KUFC head coach, Akira Higashiyama admitted that TFC II players displayed an outstanding performance and promised to work on the mistakes and try to win their next game with Sarawak United FC this Friday. –Bernama