WWE legend Hulk Hogan and his ex-wife Linda have both been banned from attending AEW shows indefinitely, Tony Khan has announced.

The 37-year-old wrestling president, son of Fulham owner Shahid Khan, announced the two were prohibited from appearing in his company in response to a controversial tweet from Linda Hogan about the protests in America. 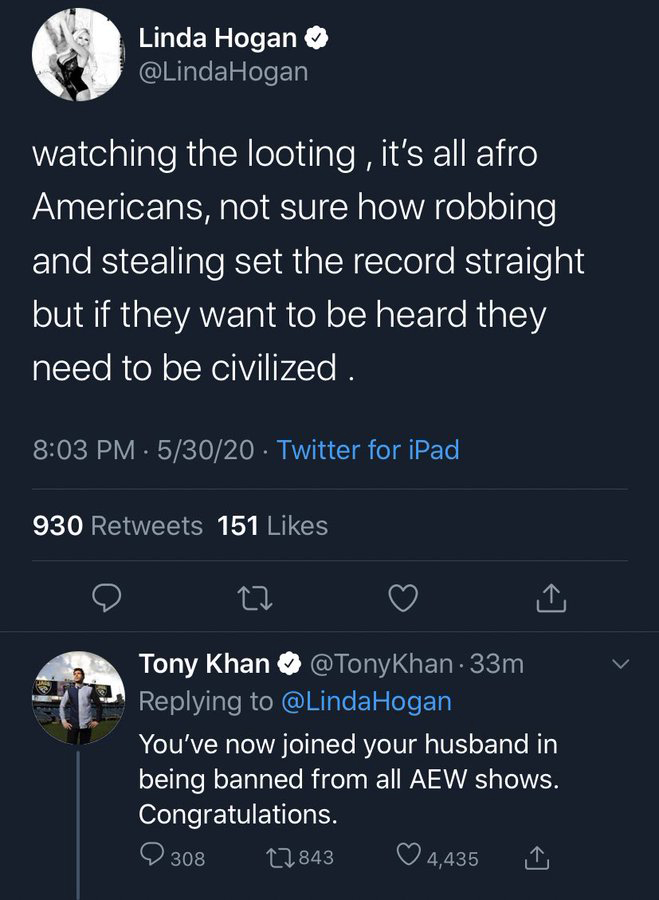 It comes as activists across the world have called for justice after George Floyd died on Monday when police officer Derek Chauvin was filmed kneeling on his neck during an arrest.

The footage of the 46-year-old begging for help in Minneapolis, Minnesota, has gone viral and caused widespread outrage both online and on the streets as mass riots broke out in the city.

Protests have since spread across the nation, including to capital Washington D.C. – causing the White House to be placed on lockdown.

Chauvin, a 44-year-old white man, was arrested and is now facing a third-degree murder charge as well as one for second-degree manslaughter.

In a since-deleted tweet, Linda Hogan referenced the ongoing riots across America where protestors are calling for police reforms.

She wrote: “watching the looting, it’s all afro Americans, not sure how robbing and stealing set the record straight but if they want to be heard they need to be civilized.”

You’ve now joined your husband in being banned from all AEW shows. Congratulations

Linda was widely condemned for the comments, with Prince Nana labelling the remarks “sickening.”

Wrestler and commentator AJ Kirsch tweeted: “@LindaHogan, you should just go ahead and delete your entire Twitter account, not just that one tweet. You know the one.”

And AEW boss Tony Khan added: “You’ve now joined your husband in being banned from all AEW shows. Congratulations.”

Linda and Hulk Hogan divorced in 2007 after 25-years of marriage following allegations the WWE Hall of Famer had been unfaithful.

The 66-year-old – real name Terry Gene Bollea – has reportedly been banned by AEW since 2015 after he was filmed making racist remarks.

Most Read in WWE

The veteran was temporarily erased from WWE’s history following the leak of a video where he used the N-word and said he hoped his daughter would never sleep with a black man.

In addition to terminating Hogan’s contract, Vince McMahon’s scrubbed deleted his profile from its site and limited any references to him in archived footage.

Yet three years later in September 2018, WWE announced that Hogan had been reinstated to its Hall of Fame.

Inter and AS Roma want Garay