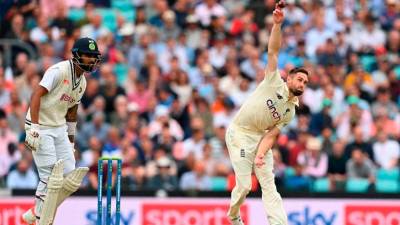 LONDON: Chris Woakes needed just six balls to mark his return to international cricket with a wicket at the Oval on Thursday as India suffered their latest collapse against England.

India, sent in to bat in difficult, overcast conditions, were 54-3 off 25 overs at lunch on the first day of the fourth Test.

That followed their paltry 78 all out on the opening day of the third Test at Headingley last week, which England won convincingly to level the five-match series at 1-1.

Woakes had excellent figures of 1-4 in five overs, including four maidens, at the break but India captain Virat Kohli was still there on 18 not out.

Woakes, recalled in place of the under-performing Sam Curran after a year out of the side due to injury and Covid-related issues, took little time to justify the faith of England coach Chris Silverwood.

Coming on as first change, the last ball of his opening over was a steeply rising delivery that Rohit Sharma (11) could only fend to wicketkeeper Jonny Bairstow, who made good ground to hold a safe catch.

Warwickshire all-rounder Woakes bowled three consecutive maidens before India’s 28-1 became 28-2 when Ollie Robinson, who took a Test-best 7-81 at Headingley, had KL Rahul lbw for 17 with a ball that cut back in off the pitch.

Cheteshwar Pujara had checked England’s progress at Headingley with a well-made 91 but managed just four in 31 balls, edging an angled-in delivery from James Anderson straight to Bairstow.

The Yorkshireman is back behind the stumps after regular wicketkeeper Jos Buttler missed this match to attend the birth of his second child.

Next in was Ravindra Jadeja, rather than regular No. 5 Ajinkya Rahane.

Rahane, India’s vice-captain, has scored just 95 runs this series at an average of 19, whereas left-hander Jadeja had made 133 runs at 26.6, but the decision represents a lack of confidence in Rahane.

Kohli, whose 55 in the second innings at Leeds was his highest score of the series, gave the large number of India fans at the Oval something to cheer by getting off the mark with an on-driven four off longstanding tormentor Anderson. – AFP