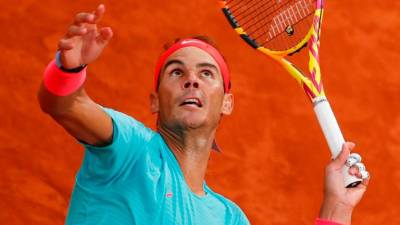 PARIS: Claycourt master Rafael Nadal powered his way into the fourth round of his beloved French Open as his campaign for a record-extending 13th title picked up momentum with a merciless 6-1 6-4 6-0 demolition of Italian Stefano Travaglia on Friday.

“That means that I have been on the TV for such a long time, that’s the main thing. The same like when I was a kid, I was watching (Pete) Sampras, (Andre) Agassi, Carlos Moya, etc,” said Nadal, who has yet to lose a set in this year’s edition.

“Another negative thing that means is that I am 34. That’s another point that is not beautiful. But I’m happy to hear that. I know he’s playing great. He’s a very young kid with a lot of power. I think he has an amazing future – hopefully not yet.”

Nadal faced little resistance on court Philippe Chatrier, hitting 28 winners as the stars start to align for the Spaniard.

“The scoreline is because I did a lot of good things, I went to the net more often, I was more aggressive,” he said.

“I played my best match here at Roland Garros this year.”

Nadal, in his 16th consecutive appearance at Roland Garros since his triumphant debut in 2005, started in dominant fashion, winning the first nine points.

After 23 minutes, the first set was already in the bag. Travaglia had only managed six points, being completely overwhelmed by the Spaniard’s power.

The 74th-ranked Italian played deeper early in the second set and Nadal found himself with a little more of a challenge.

He broke for 4-3 but in the following game faced his first break point, which he saved to extend his lead to 5-3, then held to love to move two sets up.

Travaglia’s resistance cost him dearly as he collapsed in the third set, managing only eight points.

“I made a step forward in a lot of ways,” said Nadal. “I think he played a great second set, it was close. I was able to find a way.”

Germany’s Alexander Zverev dismantled Marco Cecchinato 6-1 7-5 6-3 in under two hours on Friday to move into the French Open last 16 where he will meet Italy’s rising star Jannik Sinner.

Zverev, who did not play any claycourt events following last month’s run to the US Open final, was dominant and grabbed two quick breaks to wrap up the first set after 25 minutes.

Italian Cecchinato, a surprise semifinalist in Paris in 2018, improved his game to hold his serve as he attempted to move the sixth-seeded German around more.

Zverev’s unforced errors increased briefly and the 28-year-old Cecchinato, ranked 110th, earned his first break to serve for the set at 5-4.

But he lost his cool and slammed his racket on the ground as Zverev won the next six games in a row including wrapping up the second set.

The German had no trouble clinching the third as he finished off his opponent with his third match point after an hour and 47 minutes.

Dutchwoman Kiki Bertens showed no ill-effects from her brutal French Open campaign as she eased into the last 16 with a routine 6-2 6-2 win over Katerina Siniakova on Friday.

Fifth seed Bertens saved a match point and was overcome by cramps after her win against Sara Errani on Wednesday, leaving the court in agony seated in a wheelchair.

She had also struggled past Katarina Zavatska in round one and had spent more than five hours on court, so was grateful as she rolled past a error-prone Sinialova in 58 minutes.

Bertens was especially impressive on serve, landing 81% of her first serves in the first set, allowing Siniakova few opportunities to get into the match. – Reuters