Australian Watson retires from all cricket

Australian Watson retires from all cricket 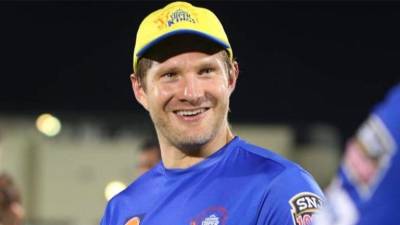 INDIA: Australian all-rounder Shane Watson retired from all forms of cricket on Tuesday, drawing the curtain on an injury-plagued career which he managed to extend by reinventing himself as a journeyman Twenty20 specialist.

Watson ended his test career in 2015 and quit international cricket the next year, surrendering in his battle against a litany of injuries that bedevilled his career.

“It really does feel like the right time now that I’ve played my last game of cricket ever for my beloved CSK…” the popular blond said in a video on his YouTube channel.

“To think that I’m finishing my playing days as a 39-year-old, after all of my injury setbacks that I had along the way, I feel so ridiculously fortunate,” said Watson who made 14 in his last outing against Kolkata Knight Riders on Thursday.

For an injury-prone player, Watson played 59 tests, 190 one-dayers and 58 Twenty20 matches in his 14 years in international cricket.

The brevity of 20-overs cricket suited the all-rounder who played franchise cricket in Australia, India, Bangladesh, Pakistan and West Indies.

He helped Rajasthan Royals win the inaugural IPL title in 2008, when he was adjudged player of the tournament, and also won the 2018 crown with Chennai.

“The curtain closes on a remarkable @IPL career. Congratulations mate you’ve done yourself proud and made every team you’ve played in so complete,” tweeted former Australia player Tom Moody. – Reuters