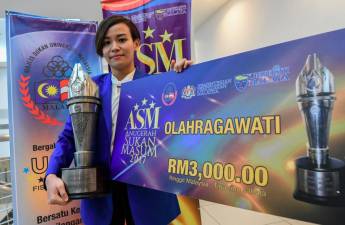 Jun Hoong emerged victorious after collecting 345.30 points to advance to the semifinals tomorrow at the Tokyo Aquatic Centre, Japan.

“Congratulations! Cheong Jun Hoong has successfully booked another slot at the 2020 Olympics in women’s 10m platform event,” it said.

Another national diver, Pandelela Rinong also advanced to the semifinals as she finished the round in fourth place, with 325.00 points.

Meanwhile, Wendy Ng Yan Yee will have the opportunity to give the Malaysian contingent its first medal at the FINA Diving World Cup 2021 as she is set to feature in the women’s individual 3m springboard finals later today.

Her achievement is a consolation after dive pair Pandelela-Leong Mun Yee missed the chance for a podium finish after coming in fourth in the women’s synchronised 10m platform finals last Sunday.

The FINA Diving World Cup 2021, which is taking place from May 1 to 6, is the last qualifying championship for the Tokyo Olympics.

Jun Hoong made history when she became the first Malaysian woman diver to win the world title in the 10m individual platform event at the World Aquatics Championships in Budapest, Hungary in 2017, a year after winning the Rio Olympic silver medal with Pandelela Rinong in women’s synchronised 10m platform. – Bernama