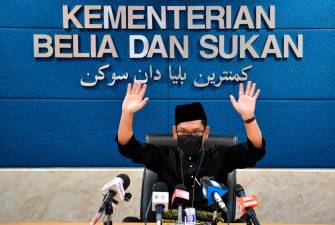 SEPANG: The Youth and Sports Ministry (KBS) has agreed to set up an internal committee of inquiry to look into the disqualification of national shot putter Muhammad Ziyad Zolkefli’s at the 2020 Tokyo Paralympics.

Youth and Sports Minister Datuk Seri Ahmad Faizal Azumu(pix) said the committee would be under the supervision of the National Sports Council (NSC), with the involvement of independent members.

Ahmad Faizal said the panel’s role would first be to determine the scope and terms of reference of the inquiry committee, the methods of gathering information, calling up and interviewing individuals who can help in the investigation as well as obtain materials or documents that could assist in the probe.

Apart from that, the scope of work of the committee is to identify issues and weaknesses and, finally, submit a report and suggestions for improvement to the KBS within a period to be determined.

“If there is a mistake on our part, in managing the athlete, it must be improved and corrected,” he said at a media conference in conjunction with welcoming home the Malaysian contingent at the Kuala Lumpur International Airport (KLIA) here yesterday.

“We need to set up this independent inquiry committee so that it can advise me as the minister so that we can make the right decision and take the right action and not follow our emotions or biased views,” he said.

He was classified as Did Not Start (DNS) following a protest lodged by Ukraine, who claimed that Muhammad Ziyad was late to enter the call room.

Maksym was announced as the gold medallist with a throw of 17.34m, breaking Muhammad Ziyad’s world record of 17.29m that he had set at the 2017 World Para Athletics Championships in London.-Bernama