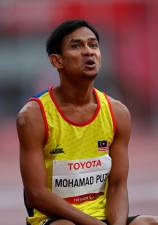 TOKYO: Mohamad Ridzuan Mohamad Puzi(pix) missed the opportunity to defend the gold he won in Rio 2016 in the final of the men’s 100 m T36 (physical impairment) sprint at the Tokyo Paralympic Games today.

Mohamad Ridzuan, who ran in the fifth lane, finished in fourth place with a time of 12.15 second (s) in the event at the Olympic Stadium.

Despite starting well, Mohamad Ridzuan, was unable to maintain his acceleration, especially in the last 10m of the race.

The result caused the 33-year -old runner, better known as ‘Dek Wan’, to return home empty-handed in his second appearance in the Paralympics.

Deng Peicheng of China pulled off a surprise when he not only won the gold but also broke the Paralympic record held by Australia’s James Turner. Turner did 11.87s in the second qualifying heat yesterday to set a new record but Deng bettered it by clocking 11.85s in the final.

James had to settle for silver with a time of 12.00s while the bronze belonged to Alexis Sebastian Chavez of Argentina who set a time of 12.02s.

Meanwhile, bogged by injury, Wong Kar Gee, who competed in the T13 men’s long jump (visual impairment) had to withdraw on the fourth jump in his debut on the Paralympic stage.

The 30-year-old only managed to make his third jump with a distance of 5.93m after the first and second attempts were disqualified.

In the event, a 7.36m jump on the third attempt by Orkhan Aslanov of Azerbaijan was enough for him to bag the gold.

Ivan Jose Cano Blanco from Spain won the silver with a best jump of 7.04m while the bronze went to American athlete Isaac Jean-Paul whose best distance was 6.93m. –Bernama