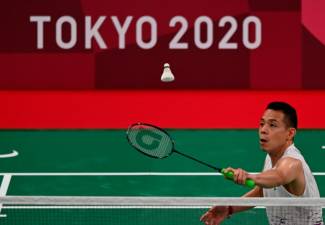 Badminton made its debut in the Paralympics in this Tokyo Games.

The 33-year-old bounced back from a set down to oust Fang Jen-yu of Chinese Taipei 15-21, 21-10, 21-16 in the last four stage at the Yoyogi National Stadium in the morning session.

The world number two, who had a slow start, was trailing most of the first set before losing 15-21.

Liek Hou, however returned to the court more energetic and pumped-up, leading 11-6 by the drink break in second set, to level the tie after winning 21-10.

In the decider, though the fight was close in the beginning, the six-time world champion Liek Hou showed superiority to notch the game 21-16 to secure his place in the final.

Liek Hou is set to face world number one Dheva Anrimusthi of Indonesia in the final, while Jen-yu will be facing another Indonesian, Suryo Nugroho, in the bronze medal decider. Both matches are scheduled at 4pm local time (3pm Malaysian time).