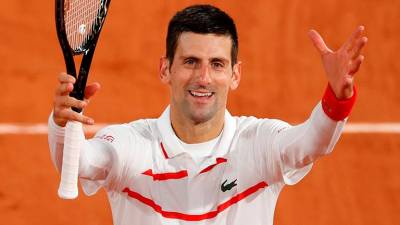 PARIS: Novak Djokovic maintained his imperious progress at the French Open with a 6-0 6-3 6-2 drubbing of Colombian Daniel Galan to move effortlessly into the last 16 on Saturday.

The 33-year-old was rarely extended by his 153rd-ranked opponent and even found time to help out with court sweeping duties when the match was interrupted by rain.

Djokovic, like 12-time champion Rafa Nadal, has reached the last 16 without the loss of a set although things will toughen up with powerful Russian Karen Khachanov up next.

The 33-year-old Serb won the first set in 28 minutes and when he broke for a 2-0 lead in the second set a rare ‘triple bagel’ looked a distinct possibility.

But Galan, a lucky loser from qualifying, got on the board with a forehand winner which brought loud cheers from the small crowd on Court Philippe Chatrier.

With heavy rain falling and the roof sliding slowly across, Djokovic ordered play to be halted after Galan slipped on the muddy baseline.

After more clay had been added to improve the slimy surface, a laughing Djokovic offered a hand with sweeping duties before resuming his day job with the roof closed.

After that, the outcome was never in doubt although Galan did make the Serb work up a sweat with some courageous tennis.

Djokovic had to save four break points in a competitive third set before completing victory. – Reuters