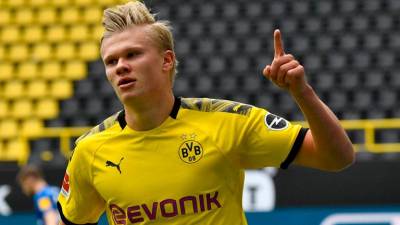 BERLIN: Erling Braut Haaland once again demonstrated ‘ice-cold’ finishing by netting twice on Saturday as Borussia Dortmund climbed to second in the Bundesliga table with a 4-0 demolition of Freiburg.

“He is our centre forward, that’s what he’s paid for, but he’s ice cold,” Dortmund captain Marco Reus said of Haaland’s latest haul.

“He will always score – no matter how well or badly he is playing.”

Dortmund bounced back from last weekend’s shock defeat at Augsburg as Haaland shone to leave him on 21 goals in 23 games for Dortmund since his January transfer as the burly Norwegian claimed clinically-taken goals.

“Not bad, it could have been more,” said Haaland drily.

Having also scored in Wednesday’s German Super Cup 3-2 defeat at Bayern Munich, the 20-year-old Haaland has netted five goals in as many games this season.

“There are already a few creatures like him, but he’s a real beast in front of goal,” said Freiburg captain Christian Guenter with grudging admiration.

“The first big chance he gets, goes in.”

Dortmund were missing England winger Jadon Sancho and goalkeeper Roman Buerki, both recovering from illness having tested negative for the coronavirus.

Reus made his first start for eight months after injury.

US teenager Giovanni Reyna, who set up Dortmund’s first three goals, was outstanding alongside Reus in the attacking midfield.

The 17-year-old played Haaland into space for the burly Norwegian to score both his goals and delivered a pin-point corner for Emre Can’s headed goal.

Haaland, 19, once again showed dazzling finishing when he fired home from a right angle on 31 minutes.

Can then rose highest from a corner and his bullet header put Dortmund 2-0 up two minutes after the break.

Reyna and Haaland combined again when they got in behind the defence as the American delayed his pass which the Norwegian hammered into the net on 66 minutes.

Winger Felix Passlack claimed his first Bundesliga goal in added time to complete the rout with Haaland providing the final pass.Eintracht Frankfurt top the league table after their 2-1 win over previous leaders Hoffeheim.

Croatia striker Andrej Kramaric netted his eighth goal in four games with a superb strike, curled inside the far corner, to give Hoffenheim the lead on 18 minutes.

However, Japan midfielder Daichi Kamada turned the game when he tapped home on 54 minutes, then powered through the defence before Bas Dost stabbed the ball over the line on 19 minutes from time.

It could have been 3-1 as Frankfurt had a late goal disallowed.

Champions League side Moenchengladbach romped to a 3-1 win at Cologne as Alassane Plea and Stefan Lainer fired home before Lars Stindl added a penalty on 56 minutes.

The hosts survived a late scare as Bielefeld had a goal disallowed just before the whistle.

Leverkusen were held to a 1-1 draw at Stuttgart as Patrik Schick’s early goal was cancelled out by an equaliser by the hosts’ striker Sasa Kalajdzic.

On Friday, Union Berlin enjoyed their first win of the season with a 4-0 thumping of Mainz at home as Germany striker Max Kruse scored his first goal for the hosts. – AFP

Real Madrid Player Ratings vs Gladbach: Saviour Casemiro gets 8, super-sub Modric amongst 4 to get 7.