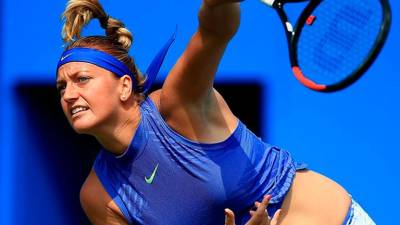 PARIS: Petra Kvitova (pix) required all her firepower to subdue Canadian teenager Leylah Fernandez as she overcame a terrible start to win 7-5 6-3 and reach the French Open fourth round on Saturday.

The 30-year-old Czech struck 32 winners and needed every one of them to halt her young opponent’s dream debut.

Kvitova was caught cold on a clammy Court Suzanne Lenglen as she trailed 5-1 in the opening set against last year’s French Open junior champion who played beautifully early on.

Kvitova had to save a set point at 1-5 and another at 3-5 before her power game really began to have an impact.

She won nine games in a row to take charge but the 5ft 4ins Fernandez, the youngest player left in the draw, never looked flustered as she continued asking questions of her fellow left-hander with clever shot-making.

Fernandez recovered one break of serve in the second set and, with Kvitova showing signs of anxiety, had two more break points to level the set at 4-4 but Kvitova held firm to move 5-3 ahead with a superbly-angled volley.

There was a fair amount of relief in Kvitova’s expression as she hammered a winner for victory, offering some warm words to her opponent at the net.

Twice Wimbledon champion Kvitova has reached the fourth round in Paris for the fifth time and will be starting to fancy her chances with China’s unseeded Shuai Zhang up next.

Former champion Jelena Ostapenko was knocked out of the French Open, beaten 6-4 6-3 by Spain’s Paula Badosa in the third round on Saturday.

The Latvian, who lifted the Suzanne Lenglen Cup in 2017, lacked control as she hit 32 winners but dished up 43 unforced errors in only one hour and 22 minutes.

Ostapenko threatened a comeback in the second set but was too inconsistent, a woeful double fault earning Badosa a match point, which she converted when the Latvian whacked a forehand wide.

Badosa, who also beat 2018 Roland Garros runner-up Sloane Stephens in the second round, was overwhelmed after causing another upset, sobbing in her towel as Ostapenko left the court.

Badosa, winner of the 2015 junior title in Paris, will next face German Laura Siegemund for her maiden appearance in the last 16 of a Grand Slam.

Her previous best performance at a major was reaching this year’s Australian Open second round. – Reuters