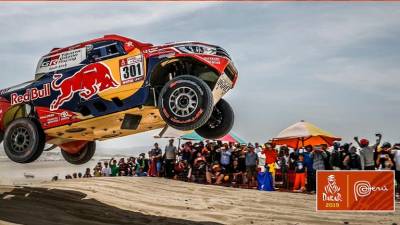 The three-time winner of the Dakar sped through the 457-kilometre stage from Bisha to Wadi ad-Dawasir in 4hr 03min 14sec to take the victory after reigning champion Sainz won Sunday’s opening stage.

“It was a good day,” said Al-Attiyah, who is aiming for a seventh Olympic skeet appearance in Tokyo later this year.

“Yesterday we lost a lot of time because we opened the way and it was not really good for us and we didn’t take risks.

“But today we went flat out and everything is working very, very well. The tyres were amazing and the car too, the pace from start to finish, no mistakes at all… there’s still a long way, but it’s a good start.”

Peterhansel, a 13-time winner of the race, leads the overall standings with Spaniard Sainz 6min 37sec behind and Al-Attiyah just over nine minutes back.

The Frenchman said he had been stressing about how to avoid getting bogged down in the first sand dunes of this year’s Dakar.

“It was the first dunes, but also the car was full of diesel which meant it was really heavy,” said Peterhansel, whose 13 Dakar victories came seven times in a car and six on a motorbike.

“So, the priority was not to get stuck. After that, I have to say that we navigated well.”

Spain’s Joan Barreda took the second stage in the motorbike category, finishing ahead of American rider and title holder Ricky Brabec, who is also on a Honda.

Brabec has a lot of time to claw back after trailing in almost 20 minutes behind Australian Toby Price in Sunday’s first stage after losing his way in the desert terrain.

Barreda, whose victory was his 25th on a Dakar special, said he had had no option but “to push with everything — I put it all in today”.

“I enjoyed this type of stage a lot. It’s faster and better for me, better than enduro like it was yesterday,” the Spaniard said.

“Right now, everything is perfect. Sure, tomorrow will be a long day and really hard again, but the race is like this. We need to keep calm and stay in front. For sure, there are still a lot of kilometres to come and we will try to keep riding, that’s all.”

Tuesday’s third stage sees competitors racing a loop around Wadi ad-Dawasir, the gateway to the Empty Quarter, a vast sand desert that covers much of the southern Arabian Peninsula and given prominence by explorers such as Wilfred Thesiger.

Organisers have promised a “hefty serving of dunes, albeit spread far and wide and in small chains” for the 403km special. – AFP

Chan 2021: Musakanya on why Zambia can beat Tanzania in Group D opener