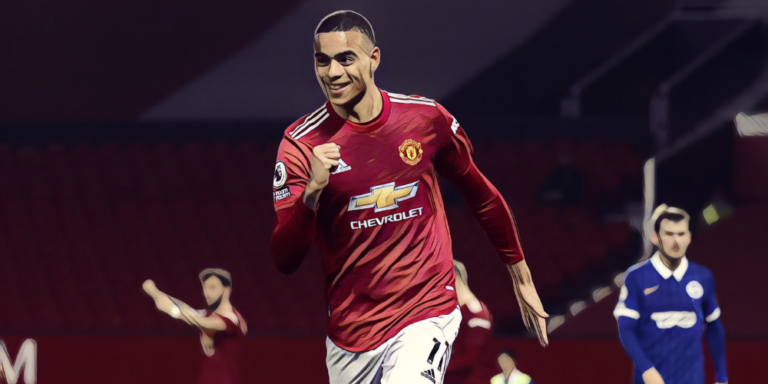 Bruno Fernandes has told Mason Greenwood ‘it doesn’t matter if he scores’ for Manchester United as long as the forward is contributing to the side.

Greenwood burst onto the scene last season to score 17 goals in all competitions for the Red Devils, equalling the record for a teenager in a single season for the club and becoming the first Premier League player in more than two decades to score 10+ goals aged 18 or under.

The 19-year-old has struggled to replicate those performances this season, but scored a much-needed goal to help Manchester United to a 2-1 win over Brighton on Sunday.

Greenwood produced an improved showing and netted just his second league goal of the season to seal all three points late on, though Fernandes insists the teenager’s performances shouldn’t be judged solely on goals scored.

“Everyone has to know that Mason is a young player and now everyone is starting to know how Mason is, it will become more and more difficult for him,” Fernandes told MUTV.

“It is normal. It is part of the development for him and he will learn from here so it doesn’t matter how many goals he scores; the most important thing for us is that he still helps the team and he is doing his best.

“It is important for us as a team, it doesn’t matter who scores. If Mason scores for us or not, it is important if he can do other jobs, recover balls, pressing, defend when we need it, make assists, create danger.

“So it is not important for him to score. He has to understand, he is such a young lad. Of course, every striker wants to score but, anyway, he will score more and more goals as the seasons pass.”

The post Fernandes tells Greenwood ‘it doesn’t matter if he scores’ following matchwinner against Brighton first appeared on The Football Faithful.