Nineties Nostalgia: Five of the best Premier League games of the 90s

Nineties Nostalgia: Five of the best Premier League games of the 90s 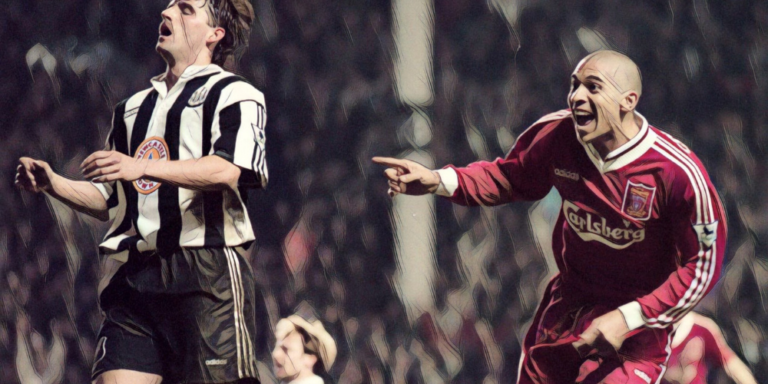 It’s a line of commentary that remains etched into the memories of Premier League fans, Stan Collymore’s last-gasp winner for Liverpool against Newcastle the dramatic conclusion to one of the division’s classic encounters.

That thrilling clash on Merseyside is often regarded as the best game in Premier League history, the two sides going toe-to-toe in an exhilarating exhibition of attacking football at Anfield.

On the 25th anniversary of Collymore’s winner, we look back at some of the defining games from the first decade of the Premier League.

Here are five of the best Premier League games of the 90s.

Everton have played more seasons of top-flight football than any other club, but a proud record of success at the highest level was in danger as relegation loomed in the 1993/94 campaign.

Everton had been crowned as champions just seven seasons earlier under Howard Kendall, though the returning manager’s second spell proved rather more difficult as the Toffees struggled during the initial seasons of the Premier League.

After finishing 13th in the league’s inaugural campaign, Kendall departed with the side 11th the following season, only for Everton to endure a nightmare run of form and head towards the relegation places.

Everton faced Wimbledon on the final day of the season and began the day in the relegation places, knowing even victory may not be enough to preserve the club’s Premier League status.

The game could hardly have began worse as the visitors raced into a two-goal lead at Goodison Park, before Everton were handed a lifeline as Graham Stuart converted high-pressure penalty just four minutes after Wimbledon’s second.

After an hour the club’s fate appeared all but determined as Sheffield United led at Chelsea, a result which – combined with Ipswich and Southampton securing draws – would have relegated Everton regardless.

Barry Horne’s equaliser and a Chelsea turnaround at Stamford Bridge set up a grandstand finish, with Stuart’s second of the game sparking wild celebrations on Merseyside as Everton came back from the brink to survive.

Amongst the most definitive contests of the Premier League era, Liverpool and Newcastle played out an enthralling encounter in the midst of the title race in 1996/97.

The game is often remembered as the game that derailed Newcastle’s title bid, but Liverpool headed into the clash with title aspirations of their own and stunned the visitors with late drama.

Robbie Fowler opened the scoring after just 97 second after heading home Stan Collymore’s cross, though Liverpool would not lead again until the latter’s match-winning intervention with just seconds remaining.

Newcastle bounced back immediately and were ahead before the quarter hour mark through goals from Les Ferdinand and David Ginola, only for Fowler to restore parity once more.

Faustino Asprilla’s brilliance restored the Magpies’ advantage as he bent a superb finish round the stranded David James, though the home side roared back once again as Collymore made it 3-3 with more than 20 minutes remaining.

Both sides pushed for a winner in a pulsating end-to-end clash and it was the red shirts that were wheeling in delight as Collymore crashed home a winner in stoppage time.

John Barnes found the record signing in space and a rifled finish sparked ecstatic celebrations from the home support.

Kevin Keegan was left slumped over the advertising hoardings in despair, creating one of the Premier League’s most iconic images following an unforgettable game.

Newcastle’s collapse in the pursuit of the title had threatened to leave lasting scars on Tyneside, the Magpies having surrendered a 12-point advantage to finish as runners-up to Manchester United.

Bolstered by the world-record arrival of Alan Shearer from Blackburn, the club looked to put the record straight in 1996/97 and the visit of the champions to St James’ Park offered the perfect opportunity to make a statement of intent.

Just 90 minutes later and the home support were in feverish dreamland, following a dismantling of the double winners on an evening that lives long in the memories for Newcastle supporters.

Darren Peacock scored the first after his header was controversially adjudged to have crossed the line, before David Ginola’s stunning strike provided Newcastle with a two-goal cushion before the break.

Les Ferdinand and Alan Shearer both netted in the second half in an emphatic performance from the home side, who made it five without reply courtesy of Philippe Albert’s touch of class, lifting a delicate finish over the stranded Peter Schmeichel.

Kevin Keegan described the win as his most ‘enjoyable’ day as a manager, though it was ultimately Manchester United celebrating at the end of the season after bouncing back to secure a second successive title.

Few games of the Premier League’s first decade produced as much drama and quality as this draw between Leicester and Arsenal, a fixture which saw six goals shared and Dennis Bergkamp score arguably the best hat-trick the division has witnessed.

Both sides had made strong starts to the campaign, though it was Arsenal who took control at Filbert Street through two goals from Bergkamp, the first coming in spectacular fashion as the forward received a short corner on the edge of the box before bending a superb finish into the far corner.

Leicester pushed forward in search of an equaliser and long ball found Matt Elliott on the edge of the box, the defender having remained in enemy territory after a corner kick had been cleared.

Elliott manoeuvred a shooting position before his deflected finish found the far corner, Leicester levelling in the final minute.

That, however, would prove just the start of the drama.

Leicester’s joy was short-lived as Bergkamp produced one of the defining moments of his career, controlling a long pass from David Platt perfectly, before lifting the ball over the challenge of goalscorer Elliott and steadying himself before firing the ball home.

It was a moment of breathtaking talent and a goal worthy of winning any game, though the home side had other ideas and incredibly snatched a point with the fourth goal scored in the final six minutes.

Steve Walsh headed home the most dramatic of equaliser to rescue a point for the Foxes, capping a drama-filled evening at Filbert Street.

Later that season and Arsenal had a chance to build on a strong start to the campaign, the visit of defending champions Manchester United to Highbury a stern examination of their title credentials.

Nicolas Anelka opened the scoring for the north Londoners with his first Premier League goal, the 18-year-old firing a fierce drive past Peter Schmeichel to open the scoring in the capital.

Arsenal’s lead was doubled before the break as Patrick Vieira lashed home after a corner was only half-cleared, though the Red Devils responded like champions to claw their way back into the game.

Teddy Sheringham headed home to reduce the arrears before lashing home a quick-fire second, United back on level terms before the break.

The second-half failed to continue at the same frenetic pace, though there was still time for one more twist in the tale as David Platt’s looping header sealed all three points with seven minutes remaining.

Platt’s goal sealed a statement victory for the Gunners who marched on to the Premier League title.

The post Nineties Nostalgia: Five of the best Premier League games of the 90s first appeared on The Football Faithful.