Salah can prove loyalty to Liverpool in Real showdown

Salah can prove loyalty to Liverpool in Real showdown 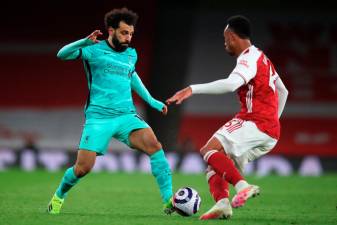 LONDON : Mohamed Salah can silence the critics who question his loyalty to Liverpool by avenging the most painful moment of his career when the Egypt star faces Real Madrid in the Champions League quarterfinals on Wednesday (3am Malaysia).

Salah sparked howls of indignation among Liverpool fans recently when he refused to rule out the possibility of playing for a Spanish club in the future.

The fact that Salah was speaking to Madrid-based newspaper Marca at the time only increased speculation that he was laying the groundwork for a move to Real Madrid.

“I hope to be able to play for many more years. Why not? No one knows what’s going to happen in the future, so maybe one day, yes. It’s not up to me,“ Salah said when asked if he was keen to try Spanish football.

Salah’s flirtatious response was similar to the one he gave to another Spanish outlet in December when questioned about a potential La Liga move.

“I think Madrid and Barcelona are two top clubs,“ he told AS.

Whether either Real or Barcelona could afford to buy Salah amid the current financial difficulties caused by the coronavirus pandemic remains to be seen.

But for a club whose supporters pride themselves on their passionate and unflinching loyalty to the Liverpool cause, Salah’s refusal to rule out a switch to Spain was a careless own goal.

It tapped into the long-standing suspicion among a section of Liverpool’s fanbase that Salah, whose contract runs until 2023, is motivated by personal glory rather than team success.

The cynics support their claims by highlighting Salah’s occasional spats with Liverpool forward Sadio Mane when he shoots rather than passing to a better placed teammate.

They also point to Salah’s sulky response to being substituted during the defeat against Chelsea in March, and his reported frustration at being ignored for the Liverpool captaincy in the absence of the injured Jordan Henderson.

Of course, Salah could rightly mention that Liverpool might well have failed to win either the Champions League in 2019 or the Premier League last season without his goals and sublime skills.

Even this season, with Liverpool in the midst of a failed title defence marred by seemingly endless injuries, Salah’s haul of 26 goals – including one in Saturday’s 3-0 win at Arsenal – shows what a threat he carries.

With 120 goals in 193 appearances in all competitions since joining from Roma in 2017, Salah is rightly ranked among Liverpool’s all-time greats.

But the 28-year-old’s place in the hearts of Kopites might not be so secure.

Michael Owen and Steve McManaman – both local heroes at Liverpool at the time – were never so fondly regarded after swapping Anfield for Real’s Bernabeu.

Inspiring Liverpool to a revenge victory against Real in a rematch of the 2018 Champions League final won by the Spanish club would go some way to appeasing the doubters.

That bitter 3-1 loss in Kiev remains a personal nadir for Salah, who was in tears on the pitch after being forced to come off with a first half injury following a clash with Sergio Ramos.

Salah had suffered a dislocated shoulder that would hamper him at the World Cup later that year, with some claiming Ramos had deliberately exacerbated the injury with the way he dragged the Egyptian to the turf.

“Let’s just say that I have special motivation to win the tie and go through to the semifinals,“ Salah told Marca about the Real reunion.

Ironically, Real captain Ramos is expected to miss both legs of the quarterfinal with a calf injury.

Ramos’s absence is a major boost for Liverpool as they seek to salvage a miserable season by winning a seventh European Cup.

If Salah can play a leading role in making that dream come true, his commitment might not be questioned quite so often. – AFP