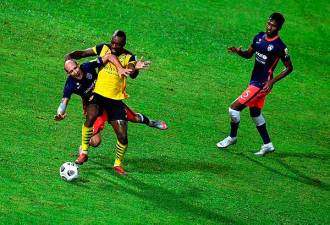 KUALA LUMPUR: Johor Darul Ta’zim (JDT) can thank their lucky stars for walking away with all three points after a last-gasp penalty by Bergson da Silva gave them a 1-0 win over Kedah Darul Aman FC (KDA FC) in their Super League top-of-the-table clash at the Darul Aman Stadium in Alor Setar yesterday night.

Referee Razlan Joffri Ali had no hesitation in pointing to the spot when JDT substitute Mohamadou Sumareh was fouled in the box by KDA FC import defender Renan Alves in second-half injury time and just when it looked like both teams were about to share the spoils.

Bergson kept his cool to slot home his 10th goal of the season when he sent KDA FC goalkeeper Mohd Shahril Sa’ari, who was outstanding throughout the match, diving the wrong way.

Earlier, with both teams going toe-to-toe, KDA FC striker Kpah Sherman came close to giving his team the lead in the 41st minute, but his header, off a free-kick taken by Rabith Ataya, crashed into the crossbar with JDT goalkeeper Mohd Farizal Marlias well beaten.

With the slim win, JDT continue to top the standings with 27 points to go three points ahead of second-placed Terengganu FC (TFC), who had no problems overcoming basement side UiTM FC 3-0 at the Sultan Mizan Zainal Abidin Stadium.

The home win also sees Mohd Nafuzi Mohd Zain’s men bounce back from last week’s 4-1 capitulation at the hands of Penang FC and reignite their challenge for the league title.

TFC got off to a cracking start, going 2-0 up after just 10 minutes through David da Silva (8th minute) and Muhammad Faisal Abdul (10th minute) before Rahmat Makasuf wrapped up the proceedings with the third goal in the 77th minute.

The 32-year-old Brazilian scored the first from a free-kick in the 36th minute, added a second from the spot in the 52nd minute before putting the icing on the cake with his third of the night with a right-footed pile-driver in the 89th minute.

Although Penang FC managed to narrow the deficit through Muhammad Danial Ashraf Abdullah’s 64th-minute strike, it was simply not their night as KL City FC basked in the limelight to bag all three points.

The victory enabled KL City FC to leapfrog Petaling Jaya City FC into sixth spot with 16 points while Penang dropped one spot to fourth with 22 points.-Bernama