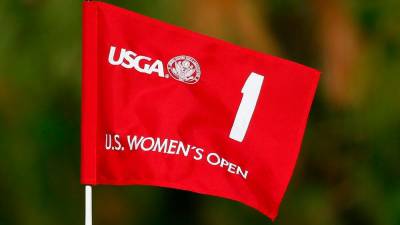 SAN FRANCISCO: Yuka Saso went on a birdie blitz on a frigid Friday afternoon at the Olympic Club to card a four-under 67 and grab a one-stroke lead heading into the weekend at the U.S. Women’s Open.

The 19-year-old Filipino player drilled a long putt on her final hole for her sixth birdie of the day to drop to six-under par at the major, one clear of South Korea’s Lee Jeong-eun.

“I love playing golf and am just thankful that I’m here,” said Saso, who said she models her swing after four-time men’s major champion Rory McIlroy.

Jeong-eun nearly caught Saso at her last hole but her birdie putt died just short of the hole and the tournament’s 2019 champion had to settle for solo second place.

“The course is not that easy but with my focus, attention and efforts, I think I can do better,” the South Korean player said of the sprawling oceanside course, which has been visited by dense coastal fog through the first two rounds.

The Cinderella story of New Jersey high school student and overnight co-leader Megha Ganne seemed like it was destined to come crashing back to earth after two early bogeys in her morning round.

But the 17-year-old amateur proved she is full of fight, mixing three birdies with bogeys to grab a share of third with fellow American Megan Khang, who she will be paired with on Saturday.

“Once the first birdie goes in, it’s like you know more are coming,” she said. “So it’s a good feeling.”

Ganne, who received encouragement from New Jersey governor Phil Murphy on Twitter on Friday, has committed to attend nearby Stanford University next year.

The shot of the day came off the nine-iron of Jennifer Kupcho, whose tee shot on the par-three 13th bounced twice before disappearing into the cup for the first ace of this year’s tournament.

The shot proved to be a momentum shifter for the American, who nailed two more birdies and avoided any bogeys the rest of the way to sit one-over par for the tournament and still very much in the mix.

A dangerous group of experienced players lurk not far behind the leaders including 10-time LPGA tour winner Shanshan Feng of China, who is in fifth place after two solid rounds.

Seven-time major winner Inbee Park, 11-time LPGA tour winner Lexi Thompson and overnight co-leader Mel Reid are knotted at two-under in a share for sixth place and it would come as no surprise if any one of them were hoisting the trophy on Sunday.

Defending champion A Lim Kim, 2014 champion Michelle Wie West and 2010 champion Paula Creamer were among those who missed the cut.

This week marks the first time that the oldest women’s major has been played at The Olympic Club, a course that has hosted five U.S. Opens. The club did not admit its first female member until 1992. -REUTERS