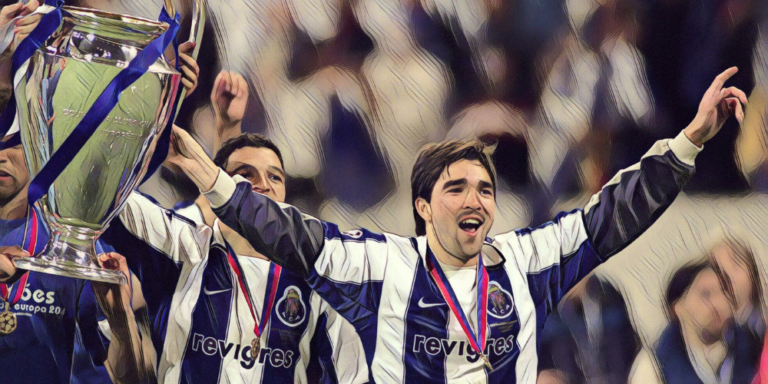 Football fanatics can be found in almost every corner of the globe, but for those born in Brazil the infatuation with the global game borders on obsessive.

For Anderson Luís de Souza, better known as Deco to you and I, it was no different.

Deco was born in São Bernardo do Campo, a Brazilian municipality of the state of Sao Paulo, and from the moment the youngster found his feet there was rarely a football far from his reach.

Brazil boast a perhaps unrivalled reputation for producing talented young players, the next Pele, Ronaldo or even Neymar never far from being labelled, as the latest bright thing begins to make an impression on the opposing side of the Atlantic.

Deco was never touted for special things despite his obvious talent, but it is the midfielder’s understated genius that saw him enjoy a career of huge success.

The familiar traits that later defined the star – a fixative first touch and fluid balance – were brought to the attention of visiting Portuguese scouts in the late nineties, with Benfica offering the 19-year-old of Portuguese descent a route into European football.

Hopes of a big break failed to materialise however, where despite an impressive loan spell at Alverca, he returned to Lisbon to find himself unwanted under manager Graeme Souness.

Deco was sold to Salgueiros as part of an exchange deal having never made an appearance in Benfica colours, where despite an injury-hit period Porto gambled on his services to provide the midfielder with a second shot at one of Portugal’s elite.

He arrived at the Estádio das Antas in time to collect a league winner’s medal for the 1998/99 campaign, but the following three seasons resulted in a drought as Sporting Lisbon and city rivals Boavista shared the next three championships.

Porto’s rise back to prominence would be rocketed following the arrival of Jose Mourinho as manager, the charismatic and cock-sure coach having endured an ill-fated nine-game spell as Benfica manager before working relative wonders at União de Leiria.

His impact was instant.

Porto climbed from fifth to third to secure UEFA Cup qualification following Mourinho’s mid-season appointment in 2001/02, with Deco flourishing at the tip of a midfield diamond to score 19 goals in all competitions.

Mourinho has long held a reputation for tactical pragmatism, but a narrow midfield four allowed his most talented player to pick up possession in advanced areas and supply the two-man forward line.

The following season proved spectacular as Mourinho and Deco conquered all before them, with it difficult not to wonder how their success sat with the Benfica hierarchy.

Porto won the league title in comfortable fashion ahead of the Lisbon giants, their success orchestrated by both a coach and creative catalyst prematurely discarded in the capital.

Mourinho’s side defeated former side União de Leiria to claim a domestic double, whilst a strong run in continental competition saw Porto eliminate the likes of Panathinaikos and Lazio to reach the UEFA Cup final.

The Sevilla showpiece saw Porto face Celtic, and the trophy was secured following a performance from Deco that made Europe’s biggest clubs sit up and take notice.

The little midfielder was masterful, shifting effortlessly away from challenges and probing with his passing.

Porto twice led – Deco the architect of the second with a nonchalant pass into the path of Dmitri Alenichev – but Henrik Larsson’s brace of headers restored parity.

The night would belong to Porto and their marauding magician however, as Derlei’s winner sealed treble success in Spain.

Deco ran the show for @FCPorto in the 2003 final

Deco had been directly involved in 40 goals during Porto’s historic season and predictable interest arrived, though he remained with the club the following season as Mourinho’s men went one better.

Undisputedly the best side in Portugal as a second title was secured, the acid test of this side came in the Champions League and a memorable night in Manchester injected momentum.

Porto stared into the face of elimination with just seconds remaining against perennial contenders Manchester United, only for Costinha’s stoppage-time goal to rescue the the Dragões and spark Portuguese pandemonium and Mourinho’s iconic touchline celebration.

Deco was at his brilliant best once more as Lyon were beaten in the last eight, scoring one and providing three assists as the Ligue 1 side were beaten 4-2 on aggregate.

His goal came in routine fashion from close range but his assists were anything but ordinary, including a sensational outside-of-the-foot cross that was met emphatically by Maniche to seal progress.

One of the greatest playmakers in recent history…

Deportivo La Coruna – conquerors of holders AC Milan after overturning a 4-1 first-leg defeat – awaited in the semi-finals, where Deco was once again the stand-out figure, winning the penalty which allowed Derlei to seal Porto’s passage to the final.

He scored his side’s second and was named man of the match as the Portuguese were crowned European champions with a convincing 3-0 win in Gelsenkirchen.

From discarded prospect at Benfica to the creative fulcrum of the continent’s finest, Deco’s evolution was acknowledged with UEFA’s Club Footballer of the Year award after providing a tournament-high six assists.

That summer saw the midfielder included in the Portugal squad for Euro 2004, the host nation capitalising on Brazil’s failure to call-up Deco for international honours.

Luiz Felipe Scolari – who had ignored Deco during his time as Brazil manager – realised his mistake and the Portuguese citizen represented his adopted nation despite initial protests from Portugal’s players and media.

His performances soon won over the sceptics however, featuring prominently as Portugal reached the final before an upset defeat to shock champions Greece.

Deco had proven he belonged amongst the elite and in 2004 got his career-defining move, signing for a Barcelona side beginning to show shoots of recovery under Frank Rijkaard.

Ronaldinho’s arrival the previous season is widely viewed as the catalyst behind Barcelona’s renaissance, but the signing of Deco provided the brilliant Brazilian with a teammate on which to unload some of the creative burden.

The duo formed an instant understanding as Deco thrived in a deeper role, finishing the calendar year on the Ballon d’Or podium, sandwiched in second-place between Ronaldinho and winner Andriy Shevchenko.

Whilst the individual accolade proved elusive, silverware soon flowed in Catalonia as Barcelona claimed successive Spanish league titles, the second coming alongside Champions League success after coming from behind to beat Arsenal in 2006.

Deco had won Champions League titles at two separate teams in the space of just three seasons, being named as the tournament’s best midfield player on each occasion.

Do you remember @FCBarcelona‘s Deco?

Those first two seasons at the Camp Nou saw Deco thrive as the Catalan’s conductor-in-chief, a signing as stylistically suited to Barcelona as any player honed in their fabled academy ranks.

The success failed to last however, and cracks soon appeared to show.

Two seasons without a title followed and the players responsible for the success of the Rijkaard era quickly became blamed for the unraveling of his reign.

Both Deco and Ronaldinho were criticised for extravagant lifestyles away from the game and for repeated breaches of discipline, the arrival of Pep Guardiola leading to the exits of both players – amid concerns from the club’s hierarchy over the duo’s potential influence on a young Lionel Messi.

Chelsea – who had sought Deco’s signature alongside Porto teammates Ricardo Carvalho and Paulo Ferreira in 2004 – came calling again in a reunion with former Portugal boss Scolari at Stamford Bridge.

His debut included a stunning goal from distance against Portsmouth, whilst a series of impressive performances saw Deco named as the Premier League’s Player of the Month for August.

A delicious drive from Deco

The bright start fizzled out as the Scolari era took a downturn however, the managed sacked in February following a poor run of form as Deco’s season was disrupted by injury.

He remained despite interest from Inter Milan that summer, winning a domestic double as part of a free-scoring Chelsea side during the 2009/10 season, even if fitness issues once again plagued his campaign.

Deco was never quite the creative heartbeat at Chelsea as he had been at previous clubs, but there were flashes of his gifted genius including a catalogue of spectacular goals.

Amongst the highlights of his time in arguably the most fun Chelsea side in recent memory was a glorious goal at Bolton, with Deco and Frank Lampard combining in a sublime one-touch move to assist Didier Drogba.

After two seasons in England, Fluminense was the destination of choice as Deco sought a swansong in his native South America.

He helped the Brazilian side to a first league title in 25 years and two championships in three seasons, though his time on the treatment table became ever more frequent and the boots were finally hung up in 2013 as the curtain closed on a storied career.

Deco can often be overlooked when assessing the finest footballers of his generation, but perhaps the greatest talent of the Mourinho-moulded maestro was his ability to raise the levels of those around him.