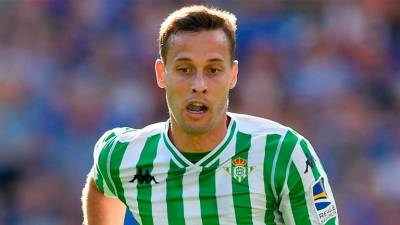 MADRID: It is just over a decade since Spanish midfielder Sergio Canales (pix) left his hometown club Racing Santander to join Real Madrid.

Then a 19-year-old wonder kid, Canales had set La Liga alight with his displays in Cantabria, leading some pundits to suggest a shock call-up for the 2010 World Cup was on the cards.

The call never came, Spain became world champions for the first time and Canales’ spell in Madrid was not a happy one as he struggled for game time under Real’s new coach Jose Mourinho.

After a season on the periphery, he signed for Valencia on a two-year loan deal in 2011, hoping to earn a place at Euro 2012.

It was at Mestalla where Canales would initially flourish but also have the first of three cruciate ligament injuries that have blighted his career and made him change his style of play.

But he never lost heart and has produced his best form at Real Betis who are now flying high under Manuel Pellegrini – the coach who took Canales to Madrid but never got to manage him.

“There were moments during the recoveries where things were not going well but I never gave up,” Canales told Marca. “What I did was look for another solution. I never lost my smile.

“There were difficult moments when I thought I wasn’t going to get back to my level. To turn it all around and feel better than before the injury gives me a lot of energy and strength.”

He joined Real Sociedad in 2014 but injuries plagued his spell in San Sebastian. He even missed his honeymoon in 2016 while he was recovering from injury.

When he was released on a free transfer in 2018 many in the game suspected his time at the top level was up.

However, Betis took a punt and have been rewarded with dazzling displays from Canales over the past two years, which have seen him largely injury-free.

Last week the midfielder, who made his long-awaited Spain debut in March 2019, was again included in the squad for the friendly against Portugal on Oct 7 and two Nations League clashes against Switzerland on Oct 10 and Ukraine on Oct 13.

He celebrated with a stellar display and a goal at Valencia in a 2-0 win as Betis temporarily topped La Liga on Saturday.

Should Canales steer clear of injury and carry on playing well he should finally be part of a Spain squad at a major tournament and show the world what he can do. – Reuters