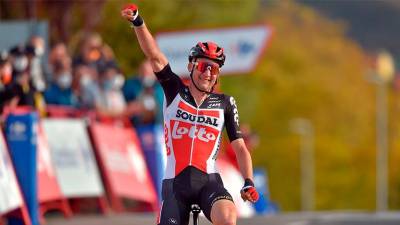 SPAIN: Belgium’s Tim Wellens claimed his second stage victory at the Vuelta a Espana on Wednesday as Primoz Roglic retained the overall lead in an uneventful day for the general classification.

Wellens of Lotto Soudal won stage 14 in Ourense after holding off a late surge from EF Pro Cycling’s Michael Woods.

Roglic remains 39 seconds ahead of Ecuadorian Richard Carapaz overall, ahead of the finish in Madrid on Sunday.

Wellens now has two stage wins at the Vuelta after his triumph on the summit finish at Sabinanigo last month in stage five.

“We came here with the team to get a minimum of one stage victory,” said Wellens. “Then when we had the first one they kept putting pressure for the second.

“I knew today was a day that suited me very well. But it’s one thing to look forward to a day and another thing to be in the right position, be in the breakaway and have the right legs and today everything went perfectly.”

The 29-year-old now boasts a pair of stage wins in both the Vuelta and the Giro d’Italia.

“It’s not easy to win, I had to really fight to get in the breakaway, and all my companions in the breakaway were really strong riders,” Wellens added. “I felt Woods coming but suddenly the finish line was there and I passed first.” – AFP